Cheesemaking: A Science, an Art, and a Craft

Students make fresh mozzarella cheese and explore a career as an artisan cheesemaker as they discover the science, art, and craft involved in the development of specialty cheeses. Grades 6-8

casein: a protein that makes up about 80% of milk

cheese: a food made from pressed curds of milk

coagulate: to change to a solid or semi-solid state

curd: clumps of casein (coagulated protein) that separates from the liquid when milk coagulates

lactose: a disaccharide sugar present in milk which contains glucose and galactose units

whey: liquid that drains from the curd of clotted milk; contains lactose, proteins, water-soluble vitamins, and some minerals

The United States ranks second in the world for cheese production and produced about 6 million metric tons of cheese in 2020.9 In 2021 it was estimated that over 55,000 people were employed in the cheese production industry in the United States. Cheesemaking is a science, an art, and a craft. Science is the tool to transform milk into cheese. Art accounts for the creative skills used in the development of new cheese flavors and varieties. Crafts represent activities requiring skill. Cheesemaking requires many skills.

Cheese is one of many products made from milk. The exact date of origin for cheese is unknown, but it has been found in Egyptian tombs and murals from 4,000 years ago. It is thought that cheese was discovered by accident when it was common to store milk in a container made from an animal stomach. The enzyme, rennet is found in ruminant stomachs. When added to milk it causes milk to coagulate and separate curds (solid proteins) from whey (liquid). This means when someone would store milk in a ruminant stomach (a common practice before glass and plastic), their milk would turn to fresh cheese.

Today, the art of making cheese has become much more technical.4 Now there are hundreds of cheese varieties which can be grouped into eight categories including blue, hard, pasta filata, processed, semi-hard, semi-soft, soft and fresh, and soft-ripened.5 Currently more than one-third of all milk produced each year in the United States is made into cheese.6

The cheesemaking process uses science and chemistry to remove whey and liquid from milk to form a curd (cheese).7 Along with a vast array of cheese types, there is also a variety of cheese-making processes. Each process shares the same basic components:

Careers in the Cheese Industry

There are a variety of career opportunities that help keep cheese coming to our local grocery store. Artisan cheesemakers often work in shops to perform each step along the entire milk-to-cheese process.  Some specialty shops may even raise their own dairy animals (cattle, sheep, or goats) for the milk that makes their cheese. There are also careers working in large cheese processing facilities used to stock grocery stores and food services across the country. These careers require a variety of training and education in the subjects of microbiology, chemistry, food science, or process engineering. Specific tasks include research and development, quality control, technical services, customer service, and sales. 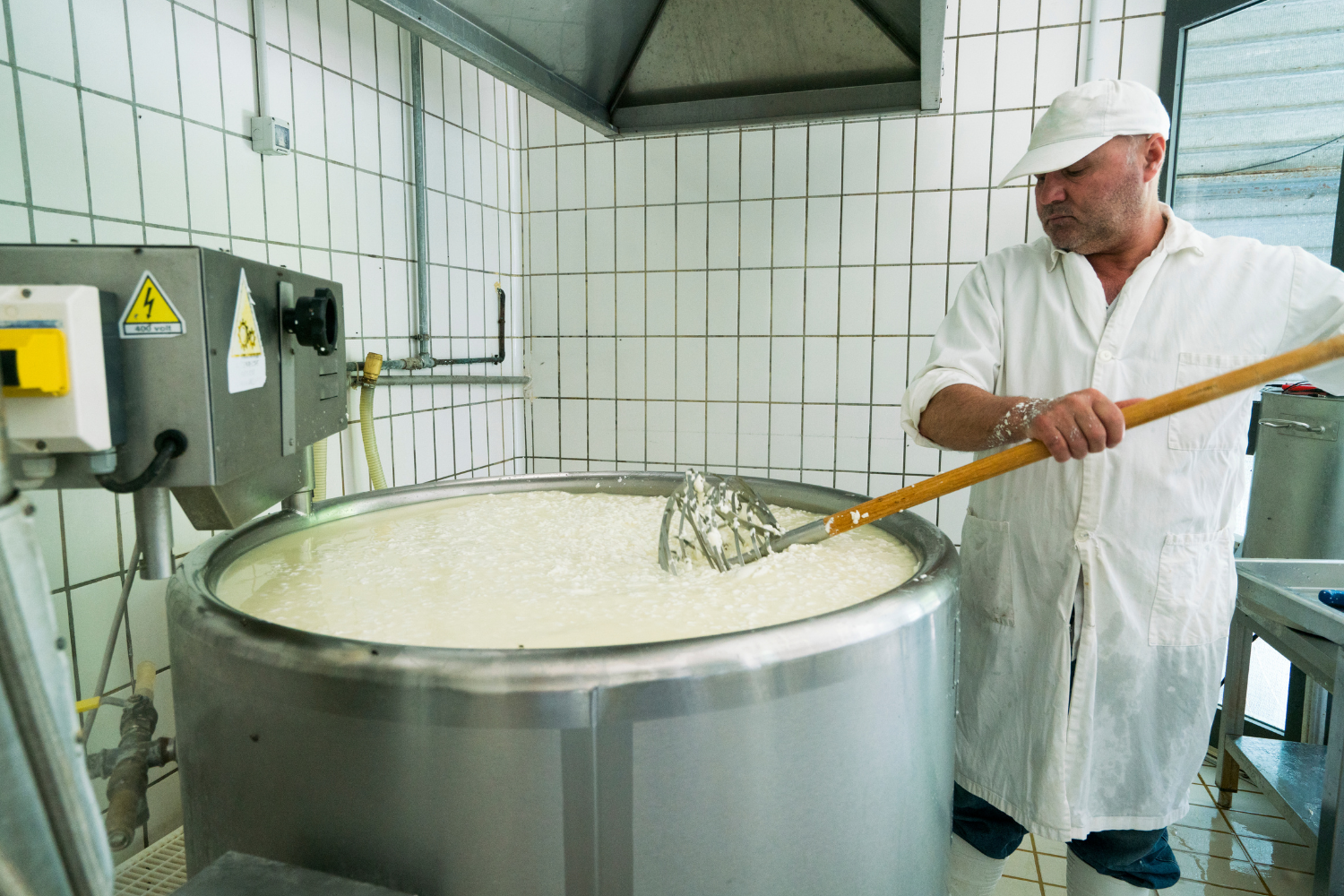 Activity 1: The Science of Cheesemaking

Preparation: Prior to class, gather the ingredients and kitchen supplies outlined in the Mozzarella Cheese recipe. If possible, make the recipe once before class for practice. The Making Mozzarella Cheese in the Classroom video can also help illustrate the steps. Set up the hot plate in front of the class or in an area where students can best watch the cheesemaking process.

Activity 2: The Art and Craft of a Career in Cheesemaking