Students will explore the carbon cycle and evaluate associated phenomena of climate as they discover the impact climate change could have on the farms that produce our food. Grades 6-8

adaptation: a change or the process of change by which an organism or species becomes better suited to its environment

agricultural practices: a collection of principles used to facilitate farming

climate: the prevailing weather conditions in a specific area over a long period of time

deforestation: the action of clearing a wide area of trees

food security: the state of having reliable access to a sufficient quantity of affordable, nutritious food

fossil fuel: a natural fuel such as coal or petroleum formed in the geological past from the remains of living organisms

global warming: a gradual increase in the overall temperature of the Earth's atmosphere generally attributed to the greenhouse effect caused by increased levels of carbon dioxide and other pollutants

mitigation: the act of reducing the severity of something

weather: the state of the atmosphere at a given place and time in regards to heat, dryness, sunshine, wind, rain, etc.

This lesson can be nested into a storyline as an episode exploring the phenomenon of how climate impacts the production of food. In this episode, students investigate the question, "How does climate impact my food supply?" Phenomena-based lessons include storylines which emerge based upon student questions. Other lesson plans in the National Agricultural Literacy Curriculum Matrix may be used as episodes to investigate student questions needing science-based explanations. For more information about phenomena storylines visit nextgenstorylines.org.

Weather is the short-term (day-to-day or minute-to-minute) state of the atmosphere. It is generally described using a combination of temperature, humidity, precipitation, cloudiness, and wind conditions. Climate is the average weather of a given region over a long term, generally 30 years. Climate Change and global warming can often be confused or used interchangeably, but global warming refers only to the long-term warming of the planet since the early 20th century.5 Looking at the big picture, trends of warming on the earth's surface are not new. See How the World Warmed: Climate Change through History for more information. Climate change refers to a broad range of phenomena such as increased temperature trends, sea levels rising, and extreme weather events such as heat waves, drought, storm surges, flooding, etc.5

Climate change is attributed largely to increased levels of atmospheric carbon dioxide that is produced by the use of fossil fuels, deforestation, and agricultural practices. Climate change can impact the health and productivity of crops, livestock, fish, and forests. Therefore, climate change has the potential to threaten our food security. Food security is defined by the FAO as a state when all people, at all times, have physical and economic access to sufficient, safe, and nutritious food to meet their dietary needs and food preferences for an active and healthy life.3

Looking forward, questions can be investigated such as How can we reduce greenhouse gas emissions? or How can agriculture adapt to a changing climate? Answers to these questions lie in both adaptations and mitigation. Mitigations refer to the steps we take to slow down the rate of climate change by reducing greenhouse gases in our atmosphere. Adaptations are actions we can take to prepare for the impacts of climate change. Examples could include selecting varieties of crops better suited to warmer weather patterns, increasing storm drainage in cities to prepare for flooding, or planting trees along streams and rivers to provide more shade and cooler water temperatures for cold water trout streams.

Does climate change impact farms around the world equally? Is it all negative? The United Nations released a report estimating future winners and losers to global warming. Farms located in tropical regions such as South Asia or sub-Saharan Africa will likely see an economic downturn as temperatures rise. However, colder climates such as those found in Canada, Russia, and some portions of the United States could see a rise in agricultural productivity with the potential of longer growing seasons and warmer climates.4 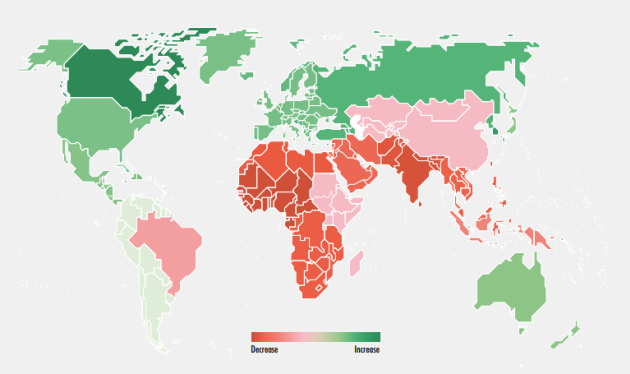