The Science of GMOs

2 hours, plus observation of seed/plant growth

Activity 3: How Do You Know it's Bioengineered?

Preparation Note: While not required, it is highly recommended (for a greater "wow" factor) that you plant and grow conventional and GM soybean seeds to the stage of first or second true leaves (about three weeks) and conduct the Leaf Test Lab as outlined in Activity 4. Many students have never grown a plant let alone conducted a test to determine if it contains a protein signifying that it has been bioengineered. For this lesson to flow in your classroom, it is suggested that you plant the soybean seeds as you complete Activity 1 and then circle back to Activity 4 when the soybean plants have true leaves to complete the lesson. Planting instructions are found in Activity 4. If time does not allow you to grow the seeds, the GM Soybean Seed lab (in Activity 4) will also demonstrate the same concept, but with less "wow." Safety Note: Let students know that they will be working with soybeans and if they have a soybean allergy please take precautions.

agrobacterium tumefaciens: a rod-shaped, gram-negative soil bacterium which can be used to introduce new genes into a plant cell

farming: the activity or business of growing crops and raising livestock

genetically modified (GM): an organism or crop containing genetic material that has been artificially altered so as to produce a desired characteristic

genotype: the genetic makeup of an organism

herbicide: a substance that is toxic to plants and is used to kill unwanted vegetation

particle gun bombardment: a method by which foreign substances such as DNA are introduced into living cells and tissues via high-velocity microprojectiles

phenotype: the set of observable characteristics of an organism resulting from the interaction of its genotype with the environment

tolerant: ability of a plant or animal to endure

transformation: the introduction of exogenous genes into plant cells, tissues, or organs

transgenesis: the process of introducing an exogenous gene, called a transgene, to a living organism

There are many ways to modify the genes or genome of plants and other living things. These genetic modification tools vary based on which method is needed for acquiring specific traits. This lesson introduces the scientific process used to create a genetically modified organism (GMO) or a bionengineered plant. While GMOs are a topic of socioscientific debate, this lesson focuses solely on the scientific method and biological processes involved in the development of a transgenic plant.

How GMOs Are Created

Every living organism is made from the instructions encoded in strands of DNA contained in its cells. Changes in this genetic code distinguish one species from another (a cow from a corn plant), as well as one trait from another within a species (a cow with a black coat verses a cow with a red coat). Found within the genome of every species is a series of traits and characteristics. Traits manifested through an organism’s phenotype include colors, sizes, and other observable characteristics. Other characteristics such as drought tolerance, resistance to disease, or resistance to chemicals (such as herbicides) are also found within the genotype of an organism. These genetic characteristics are passed from parent to offspring following the basic rules of inheritance originally discovered by Gregor Mendel.

The steps for creating a bioengineered (GMO) plant include the following:8

After a bioengineered plant is developed, the plant goes through an in-depth series of regulatory tests and trials which are evaluated by the USDA, FDA, and EPA in the United States to determine that the plant and the transgenic gene does not impact the environment in an unintended way or negatively alter the nutritional qualities of the resulting food or animal feed. For example, non-target insects such as pollinators and butterflies are carefully observed to ensure there aren’t any unintended environmental consequences from the newly engineered genome of the plant. Once all regulatory processes are complete, the plant can be approved for commercial use. These regulatory processes are normally carried out by each country that may want to import the seeds to plant or even the foods made from the genetically engineered plant.

The entire process of creating a genetically engineered plant from discovery of the trait to the launch of the seed variety takes several years and can cost over $130 million dollars.17

Weed management is an important factor in agricultural production that impacts crop yield (the amount of a crop that is produced and harvested). Uncontrolled weeds reduce the quantity and quality of a planted crop. Nutrients (found in the soil) and water are necessary, but limited, natural resources for healthy plant growth. Weeds (unwanted plants) compete with planted crops for water and nutrients, thus decreasing the overall harvest and decreasing the efficient use of natural resources.

Farmers can use a variety of weed control methods. There are five general categories of weed control, including preventative, cultural, mechanical, biological, or chemical (with or without biotechnology). Weeds are a constant challenge for every farmer, and herbicides are the primary and most effective tool for farmers to control weeds and maximize crop yields.11 Using herbicides (rather than other weed control methods like hand weeding and tillage) can reduce labor, increase convenience, conserve soil, and make food less expensive to produce.9

The Roundup Ready® soybean was developed in 1990 using biotechnology. In 1996, this biotech crop became commercially available to producers.12 To develop the Roundup Ready® soybean, scientists isolated the 5-enolpyruvylshikimate-3-phosphate synthase (CP4 EPSPS) gene from a naturally occurring microbe (Agrobacterium sp. strain CP4) and used particle gun bombardment plant transformation to insert the gene into the genome of soybean (Glycine max). The gene allows the soybean to produce the CP4 EPSPS enzyme that confers tolerance to the herbicide glyphosate, commercially known as Roundup®. In 2016, over 90 percent of the soybeans grown in the United States were herbicide tolerant.13

The Roundup Ready® soybean was developed to help farmers manage weeds in their fields. When weeds are left to compete with soybeans for the entire growing season, yield losses can exceed 75 percent. Nearly all soybean fields receive some type of herbicide treatment. Monsanto scientists developed the Roundup Ready® soybean technology as a tool to help farmers control weeds in soybean fields.

In this lesson students will be comparing the conventional and bioengineered soybeans. Students will examine and compare the seeds as well as the growing plants. There is no visual difference between these two varieties of soybean. The seeds and growing plants will, from a phenotypic standpoint, appear fundamentally the same.

The key difference between the Roundup Ready® and the conventional seed is that the Roundup Ready® soybean contains the CP4 EPSPS gene. This gene makes the plant tolerant to glyphosate herbicide. Research conducted by Monsanto and reviewed by global regulatory agencies confirms that the gene results in no other phenotypic changes to the plant.7 The presence of the protein CP4 EPSPS can be verified through a lateral flow immunoassay test. This type of test indicates the presence of a protein and is used for many applications, including in-home diagnostic tests like a home pregnancy test. The biotech industry uses lateral flow immunoassay tests in the process of selecting traits in plant breeding, for quality control and purity testing of seed batches, and to support bioengineered labeling. The technique employs the use of protein specific antibodies that bind to a protein (antigen) that is produced by the GMO plant. This protein is produced as a result of the inserted DNA in the transgenic plant, and it is not present in the conventional plant.

Glyphosate (the primary ingredient in Roundup®) has been used since the 1970s and has been shown to be safe both for the environment as well as in food and feed crops when used according to label directions.15 Due to Roundup Ready® soybean’s tolerance to glyphosate (via the CP4 EPSPS enzyme), Roundup® can be directly applied to soybean fields killing the weeds, but not the soybean. There are many variations of Roundup®. Farmer's use specific formulations of glyphosate to successfully utilize the weed control technology. Formulations of Roundup® available to home owners for lawn and garden use cannot be used successfully due to the addition of other ingredients. Many contain pelargonic acid and diquat dibromide which would kill BOTH the conventional and the Roundup Ready soybean. 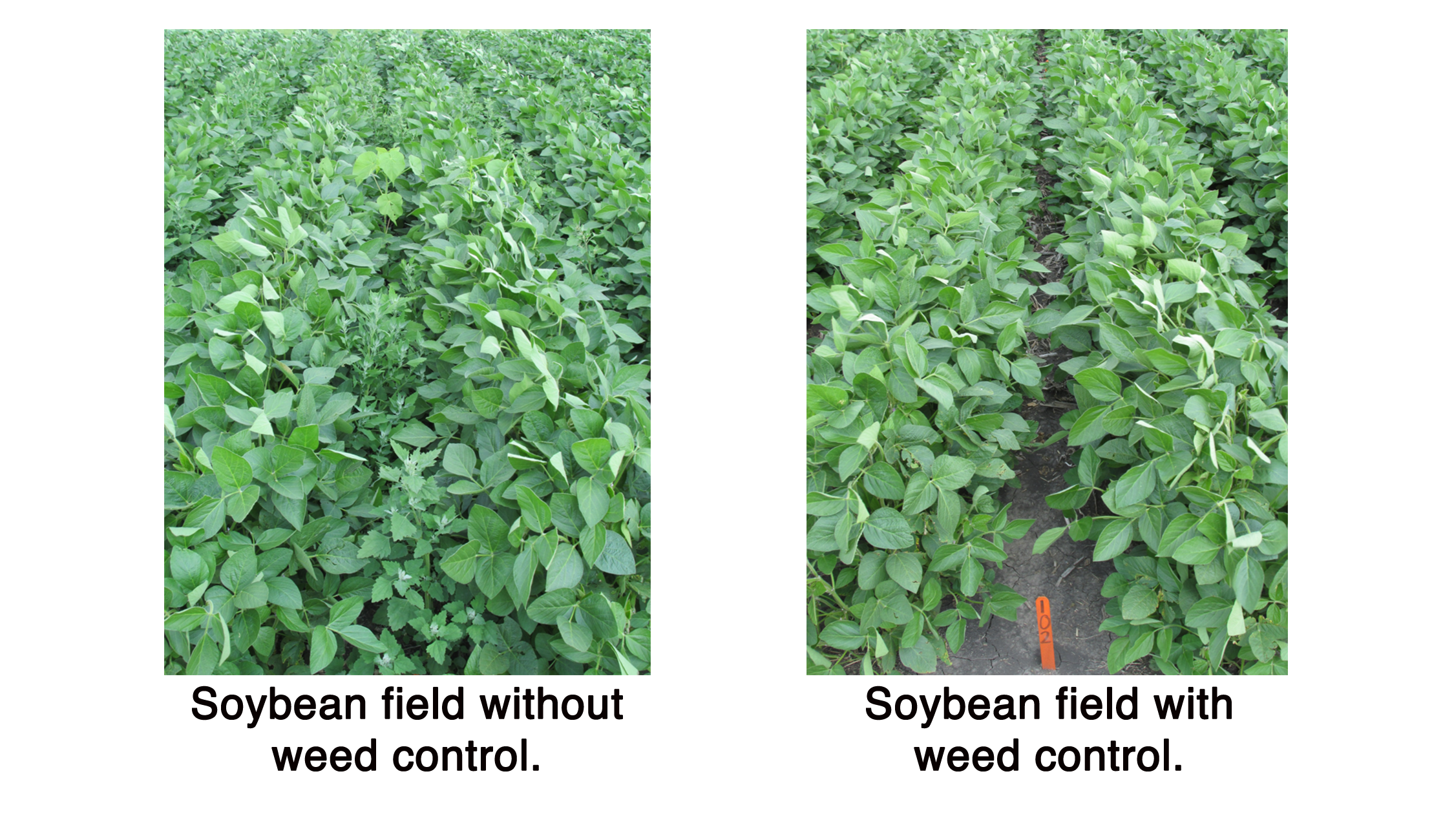 Activity 3: How Do You Know it's Bioengineered?

This final activity allows students a hands-on opportunity to see and handle the seeds and/or plants of both conventional soybeans and bioengineered (GMO) soybeans. You may choose to complete just one, or both of the lab activities below. If time is short, choose the GM Soybean Seed Test. If you have additional time and resources to grow the soybeans, continue to the GM Soybean Leaf Test allowing students the unique opportunity to not only compare the seed, but the germination and growth of conventional and GM soybean plants.

*Note: Formulations of Roundup® available to home owners for lawn and garden use typically have additional ingredients that will kill both the conventional and the Roundup Ready® soybean plant. Spraying the plants with Roundup® as a class demonstration is discouraged and will not be successful unless the correct, glyphosate-only spray is used.

With permission, portions of this lesson were adapted by the National Center for Agricultural Literacy from the original lesson packet, Crop Biotechnology: Growing and Testing Roundup Ready Soybean provided by Monsanto in 2018. The lesson was revised again in 2022.