Students will learn about the Law of Conservation of Mass by exploring environmental factors that can impact protein coagulation in milk (cheese-making process). By making qualitative and quantitative observations they will test three possible methods of making curds and whey. Grades 6-8

casein: a protein that makes up about 80% of milk

coagulation: changing a liquid to a soft semi-solid or solid mass

curd: clumps of casein (coagulated protein) that separates from the liquid when milk coagulates

tare: an allowance made for the weight of a container when trying to determine the net weight of a substance

whey: liquid that drains from the curd of clotted milk; contains lactose, proteins, water-soluble vitamins, and some minerals 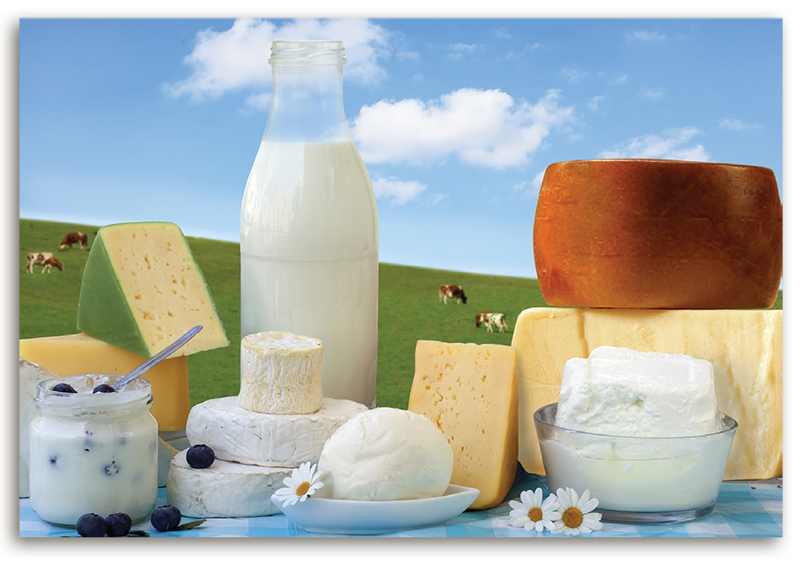 Milk, cheese, yogurt, and ice cream are all part of the dairy group. Drinking milk helps build strong bones. Unfortunately, most Americans do not drink or eat enough foods from the dairy group every day. For this reason, it is important to learn about the science and nutrition of dairy foods. In this lesson, students will explore milk by learning how cheese is made, the effect of pH on the formation of curds and whey, and the many health benefits associated with consuming dairy products.

A lactic-acid producing bacterium is added to milk to begin the cheese making process. This allows the milk to separate into curds and whey. The curds are then cut into smaller pieces allowing the liquid portion, whey, to escape. Whey is the watery portion of milk that separates from the curds when cheese is being made. Heat is applied to the curds to speed up the separation of whey. After the whey has been separated, the curds are drained, stretched, salted, and pressed to form a more concentrated cheese.

To give each cheese its own unique properties, it is then cured (“aged”) or ripened to complete the process. Cheese that needs to be cured is not ready for consumption after being prepared.

Depending on the desired characteristics, the cheese is held for a certain amount of time, at a specific temperature, and under certain conditions. Most cheeses we consume are ripened, unless they are fresh, such as fresh mozzarella or ricotta. Fresh cheeses can be consumed right after they are made. Ripening is considered the changes that occur between the formation of curd and the development of the desired characteristics such as aroma (smell), flavor, texture, and composition.

There are many factors that contribute to the cheese making process. The composition of milk is considered the most important factor affecting the curd formation. More specifically, milk’s fat and protein concentration impact curd formation because curds are primarily coagulated casein (protein). If whole milk is used, fat globules are also entrapped in the curd.

The type of acid used and temperature of milk during coagulation can also impact curd formation. Coagulation is the breakdown and reformation of proteins by heat. The curd formed at this point is soft. For example, rennet is the general term for any enzyme used to make cheese. Rennet can be found in the lining of a calf’s stomach. Scientists have been able to duplicate an artificial version of rennet to be used in larger amounts.

The following factors influence the curdling properties of milk: