Color in the Garden

Students use the art of soil painting to explore science and the natural world while learning about the color wheel, the importance of soil to agriculture, and why soils have different colors. Grades 3-5

parent material: the soil horizon just above bedrock that contains broken up pieces of rock and will eventually break down into soil

primary colors: the main group of colors (typically red, yellow, and blue) on the color wheel which can be mixed together to obtain all the other colors

topsoil: the upper layer of soil that is rich in organic matter and best suited to growing healthy crops

This lesson integrates the art concept of color with science and soils in a garden setting. In the visual arts, color theory is a body of practical guidance for mixing colors and understanding the visual impacts of specific color combinations. Early color theory principles appeared in the writings of Leonardo da Vinci and others in the 1400s. In the late 1600s, Isaac Newton discovered the color spectrum by experimenting with shining light through a prism. From these beginnings, color theory developed as a tool for artists and designers, and today it is commonly applied through use of the color wheel.

A multitude of colors can be found in the garden in everything from leaves and flowers to insects and seeds to soil and rocks. The first part of this lesson will focus on noticing colors in the garden. Students will use the color wheel to determine if the colors of items they have collected from the garden are warm or cool. Then they will classify the colors as primary, secondary, or tertiary.

The second part of the lesson focuses on the agricultural importance of soil and what we can learn about gardens and farms by observing the color of soil. Students will build an understanding of soils and their importance by painting with soil-based pigments. Soils are the foundation of agriculture, providing the support, water, and nutrients that plants need to grow. Garden plants and plants grown on farms depend on healthy soil to grow.

Soils are also important for the beauty their many colors add to our landscape. Most of us overlook this natural beauty because we see it every day. Often these colors blend with vegetation, sky, water, and other natural features. Over the centuries, humans have used soil colors to serve as pigments in bricks, pottery, and art work. These artifacts from the past give us an idea of how early people lived and worked.

Utah has over 1,300 different soil types. Each soil has its own unique characteristics. The attached soil map does not depict the colors of Utah soils, but rather uses different colors to represent different orders of soils. Within each order there are many different types and colors of soils. The map provides a glimpse of the diversity of soils found in Utah.

A lot can be learned about soil by observing its color. In general, lighter colored topsoils are found in dry areas and darker topsoils are found in grassland regions that get lots of rain. The soil found in forested, mountainous areas are generally midway between light and dark. The darkest topsoils are the richest in organic matter, which builds up over thousands of years. Grasslands have lots of organic matter because the soil is densely filled with grass roots. Grasses are constantly shedding old roots and growing new ones. When roots are shed (die), they contribute to the accumulation of organic matter in the soil. Organic matter builds topsoil that is dark and crumbly, contains the nutrients plants need, and holds just the right amount of water for plants to thrive. Soils rich in organic matter tend to be good soils for farming and growing crops.

Even if an area tends to have light colored soil, pockets of darker soil may still be found in places where additional moisture accumulates, leading to more plant growth. Similarly, light soil can be found in areas that are generally darker. In this case, a light soil often shows where soil development is thinner due to slope or as a result of erosion. Also, lighter soil colors can be found in the subsoil. The colors of subsoil and, to a lesser degree, topsoil are based on parent material.

Soils can be grouped into colors like red, pale red, black, brown, yellow, yellowish-red, and grayish-brown. However, describing soils in these terms is not very exact! So, just like the books of colors found in paint stores, there is a book of soil colors used worldwide called the Munsell Soil Color Charts. The color information in this book is based on the soil classification system used by soil scientists for describing soils. Soil samples are compared to the colors in the charts and given a specific value. Agronomists, biologists, archeologists, geologists, zoologists, and other scientists use these charts to document soil colors.

The color of a soil can indicate what kinds of minerals are in the soil and what kinds of plants will grow well in that soil. Iron provides a great variety of pigments. Soils ranging from yellow to brown to red contain iron. Organic matter turns soil a dark color and provides fertile ground for growing crops. Soils with high amounts of lime are almost white. Lime makes the soil more alkaline, or less acidic. Some plants, like blueberries, need acidic soils and would not grow well in a white, alkaline soil. Soils with a green tinge may have high amounts of copper, which plants only need in very small amounts. High copper levels will kill most plants. 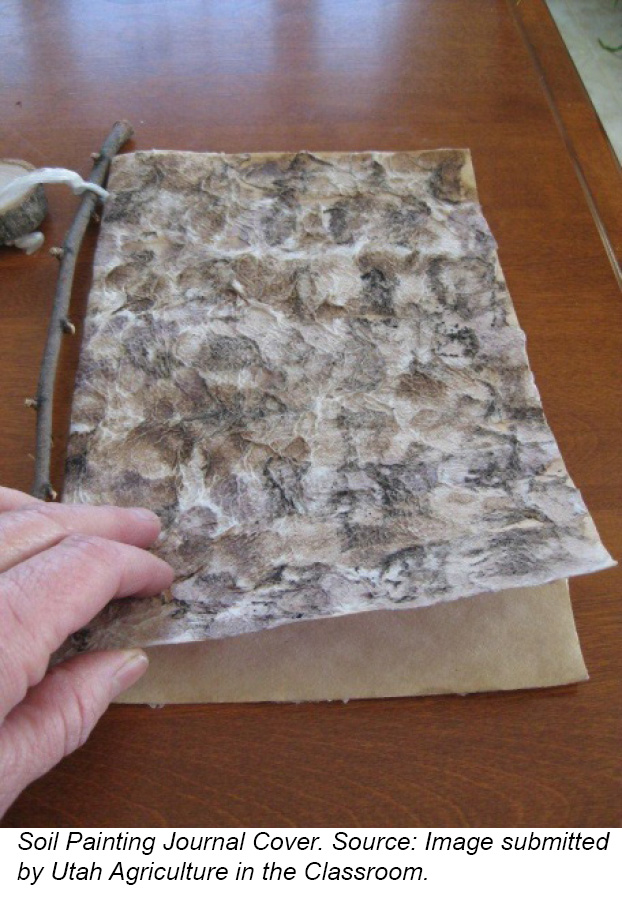