Students explore the phenomenon of what makes bread dough rise. Using baker's yeast, students will observe alcoholic fermentation and its connection to cellular respiration as they are challenged to act as food scientists and develop the best recipe for quick-rising bread dough. Grades 9-12

alcoholic fermentation: an anaerobic pathway that converts the pyruvate made in glycolysis to ethanol, produces CO2, and regenerates NAD

anaerobic: without the use of oxygen

asexual reproduction: a form of reproduction involving a single parent and producing offspring that are exact genetic duplicates

budding: a form of asexual reproduction where parent cell forms a bubble-like bud that stays attached to the parent cell while it grows and develops; then breaks away to form a new organism

food science: the study of the physical, biological, and chemical makeup of food and the concepts underlying food processing

lactic acid fermentation: an anaerbic pathway that converts the pyruvate made in glycolysis to lactic acid, regenerating NAD

This lesson can be nested into a storyline as an episode exploring the phenomenon of bread dough rising. In this episode, students investigate the question, "What makes bread dough rise?" Phenomena-based lessons include storylines which emerge based upon student questions. Other lesson plans in the National Agricultural Literacy Curriculum Matrix may be used as episodes to investigate student questions needing science-based explanations. For more information about phenomena storylines visit nextgenstorylines.org.

Cellular respiration can be a difficult topic for students to understand because it cannot be directly observed. In this lesson, students who have studied the basics of aerobic cellular respiration will be introduced to alcoholic fermentation and will conduct a simple experiment to determine how yeast gets energy from sugar. Students who aren’t familiar with using yeast in baking may wonder if it’s alive, which is another great opportunity for discussion.

Yeasts are unicellular fungi that reproduce asexually. The species Saccharomyces cerevisiae is used in bread baking and wine and beer brewing. S. cerevisiae is also used as a model organism in many laboratories because it is easy and inexpensive to culture. It is a facultative anaerobe, meaning that it undergoes both aerobic and anaerobic fermentation. In the absence of oxygen, yeast and other organisms undergo alcoholic fermentation, producing CO2 and ethanol and regenerating the NAD+ needed to continue glycolysis. While this produces less ATP than aerobic respiration, some ATP is still produced.

Yeast cells do more than respire, they go through a form of asexual reproduction called budding. Asexual reproduction involves a single parent and results in offspring that are genetically identical to each other and to the parent. Budding occurs when a parent cell forms a bubble-like bud that stays attached to the parent cell while it grows and develops. Then, it breaks away and forms a new organism.

Students may be interested to learn that yeast is all around us; sourdough bread is made by allowing yeast in the air and in the flour to colonize a mixture of flour and water. The CO2 produced during yeast metabolism is captured in bread dough, causing it to rise. The protein gluten provides a structure for the bubbles of CO2. Kneading is necessary to develop and strengthen the crosslinks between gluten molecules. If dough is not kneaded enough, it won’t be elastic enough to capture the CO2 bubbles, resulting in a flat loaf. Gluten is not found in some grains, such as oats and rice. Students who try to make a dough with gluten-free flour may find that it won’t rise at all.

In Activity 2, students are challenged to act as food scientists to develop a recipe for quick-rising bread dough. Agricultural companies, like General Mills, Land O Lakes, and Cargill, challenge food scientists to utilize raw agricultural products as efficiently as possible to develop consumer-demanded food products.  If Activity 2 must be broken up over two class periods, it might be helpful to have students mix together the dry ingredients of their dough (Step 11) on the first day so they are ready to start immediately on day two. 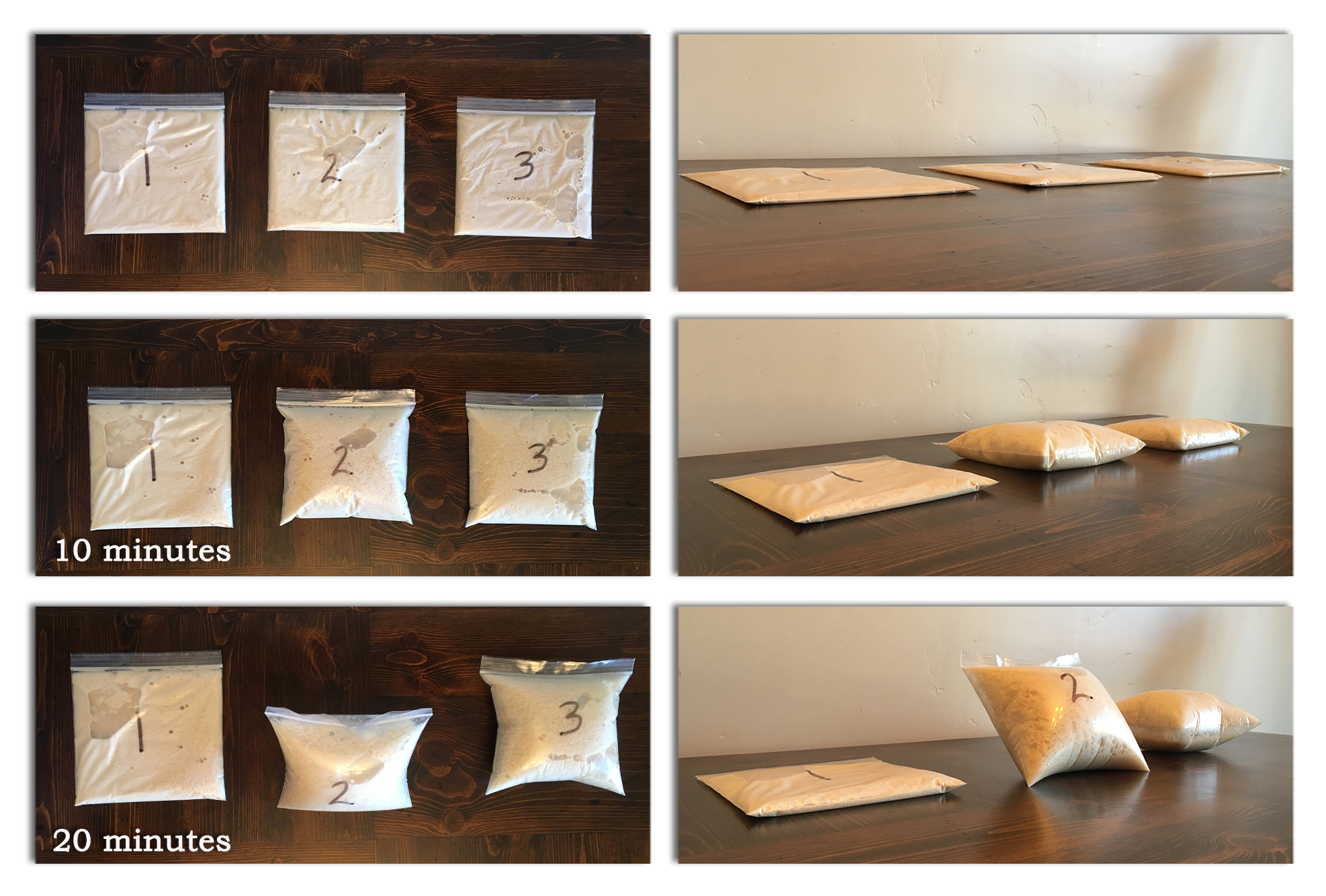 This lesson was originally written by Ann Butkowski for Minnesota Agriculture in the Classroom. It was updated and revised in 2019 by the National Center for Agricultural Literacy.

Minnesota Agriculture in the Classroom and National Center for Agricultural Literacy

CCSS.MATH.PRACTICE.MP5 Use appropriate tools strategically. Students consider the available tools when solving a mathematical problem. These tools might include pencil and paper, concrete models, a ruler, a protractor, a calculator, a spreadsheet, a computer algebra system, a statistical package, or dynamic geometry software. Students at various grade levels are able to identify relevant external mathematical resources, such as digital content located on a website, and use them to pose or solve problems. They are able to use technological tools to explore and deepen their understandings of concepts.