This lesson explains the processes of cellular respiration and fermentation and how it applies to the production and processing of honey. Grades 9-12

carbohydrate: an organic compound that is the main source of energy for the body; composed of carbon, oxygen, and hydrogen atoms

invertase: an enzyme produced by yeast that catalyzes the hydrolysis of sucrose, forming invert sugar

Prior to this lesson high school students should have some background knowledge of the processes of cellular respiration and fermentation. They should also know that carbohydrates give living organisms the energy to carry out their daily activities. This lesson plan will build on students’ existing knowledge.

All living organisms rely on cellular respiration and/or fermentation to transform glucose into usable energy (ATP). Living organisms often compete with one another for the same glucose source.

The byproducts of fermentation (including alcohol, carbon dioxide, and lactic acid) can be beneficial or harmful depending on the intended or unintended nature of the fermentation.

Honey bees are valuable managed pollinators of many agricultural crops and produce honey, an energy-rich food source and natural sweetener. Bees gather nectar from flowering plants and return it to their hive where they add enzymes from their honey stomachs. The added enzyme, invertase, breaks down sucrose, a disaccharide into its component monosaccharides, glucose and fructose. Glucose will be used by the bee in the cellular respiration process to produce ATP for energy. The bee places the honey mixture in the honeycomb and fans the mixture with their wings. This process helps to dehydrate (remove water) the mixture to ideally contain 16-18.5% moisture. The bee then caps the cell and the honey is effectively stored inside.

If the bees are unable to remove the excess moisture from the honey and the moisture content is greater than 18.6%, fermentation is more likely to occur. Fermentation is the process of changing carbohydrates to ethanol and carbon dioxide, the same process used in brewing alcoholic beverages. If the moisture content of the honey is too high or if cold weather sets in, bees will not cap the honeycomb cells. The cells will then sit open and will likely eventually ferment. 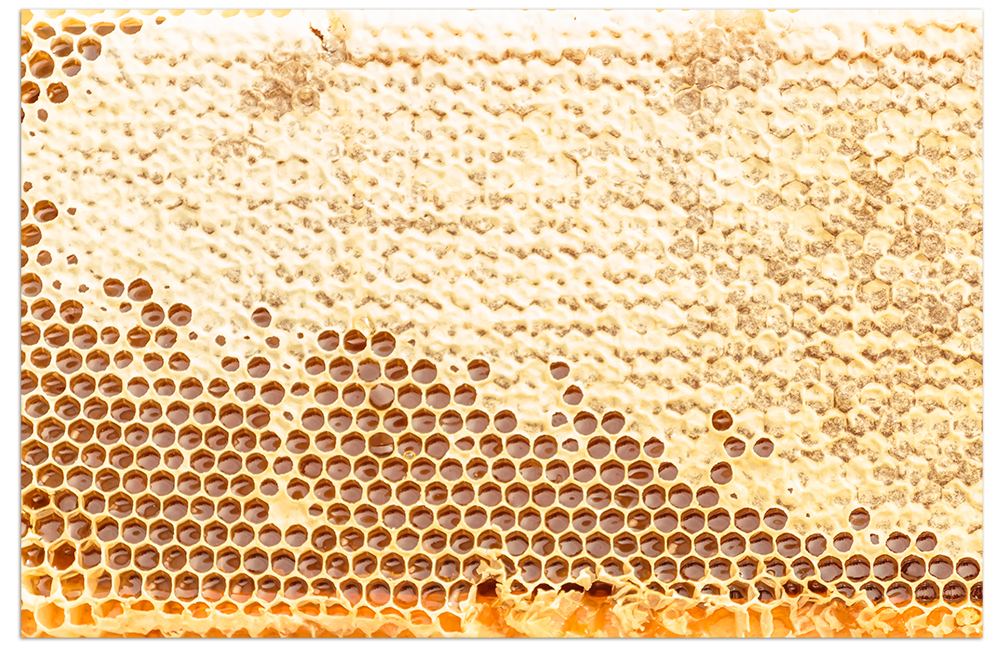 Producing a high quality honey crop requires that beekeepers protect it from fermentation. Beekeepers can reduce the moisture content of honey by placing it in a ‘hot room’ and/or with a dehydrator to decrease the water content.

When the moisture content is too high, uncontrolled fermentation can take place either in the hive or after bottling the harvested honey. This can add unwanted byproducts to the honey ruining its flavor and making it inedible as honey. If honey starts to ferment in the hive, the honeycomb cells are filled with bubbles and an odor of yeast can be smelled. Sometimes foam oozes out and collects under the frames. In a controlled circumstance fermentation of honey can be purposefully utilized to produce an alcoholic drink known as mead.

Protecting honey from fermentation is important to both humans and bees. As a food source, fermented honey is not valuable to humans for culinary use. Fermented honey can also be detrimental to the health of bees. Bees instinctively produce honey in the summer months to be a stored food source for the winters. Honey with high levels of alcohol can be poisonous to bees.

In a general sense, controlled fermentation of glucose can be used to produce products such as bread, yogurt, and biofuels such as ethanol. Understanding the process of fermentation along with its correct application allows us to protect important bee pollinators and produce more of the quality food and fuel the world demands.

Activity 1: How does the concentration of sugar affect yeast's ability to consume sugar and produce CO2 as a waste product?

Preparation: Depending on time availability, you may want to have sugar solutions and yeast suspension ready prior to the lab. Mixing instructions are included on page 3 of the attached Teacher KEY. Prepare respirometers ahead of time, or show students how to assemble their own respirometers. Designate where used sugar and yeast solutions are to be disposed in your classroom.