It's a Dirty Job

In this lesson, students will create mini habitats to observe earthworm behavior and learn about the important role that earthworms play in decomposition and plant growth. Grades 6-8

For each pair of students

decomposer: an organism that feeds on and breaks down dead plant or animal matter

decomposition: the process of breaking down or being broken down into simpler parts or substances especially by the action of living things (as bacteria or fungi)

habitat: the natural home or environment of an animal, plant, or other organism

This lesson is part of a series called, Too Much? Too Little? created to introduce middle school students to the connection between soil nutrients and the food they eat. The lessons consist of a series of demonstrations and hands-on experiments that show that plants require nutrients in certain quantities. The lesson series allows students to investigate soil properties, learn how to properly prepare fertilizer nutrient solutions, identify deficiencies in plant nutrients using a key, and much more. Other related lessons include:

Although they often go unnoticed, earthworms play a significant role in our lives. As decomposers, worms have the important job of recycling waste material into nutrients that plants can use to grow and provide food for people and other animals. As worms burrow through the soil, they ingest soil particles and obtain nutrition by digesting any dead plant or animal remains, fungi, and bacteria in the soil. Through this process, the worms mix up the soil, providing air spaces for roots and water to penetrate. Worm excrement, or castings, provide excellent fertilizer. This is why many home gardeners put worms into their compost piles.

If you have ever held an earthworm, you probably noticed that it was moist. Earthworms do not have lungs, they breathe through their skin, which must be moist in order for oxygen to dissolve and pass into their bloodstream. Earthworms need a cool, dark, moist environment. They do not have eyes but do have special receptor cells to sense ground vibrations and light. The rings on an earthworm’s body are called annuli. Tiny bristles called setae help the worms pull themselves through the soil. The lighter colored “bump” in the middle of the earthworm is the clitellum, the structure responsible for secreting mucous required for the worm to breathe, reproduce, and for protection as the worm burrows through rough soil. Worms have a special organ called a gizzard to help them grind up and digest the soil that they eat.

Earthworms come in a variety of sizes. The largest known earthworm species in Australia can reach nearly ten feet in length! Some worms live close to the surface of the soil, while others burrow six or seven feet deep.

Earthworms can be classified into three main groups based upon the soil areas where they prefer to eat and burrow. 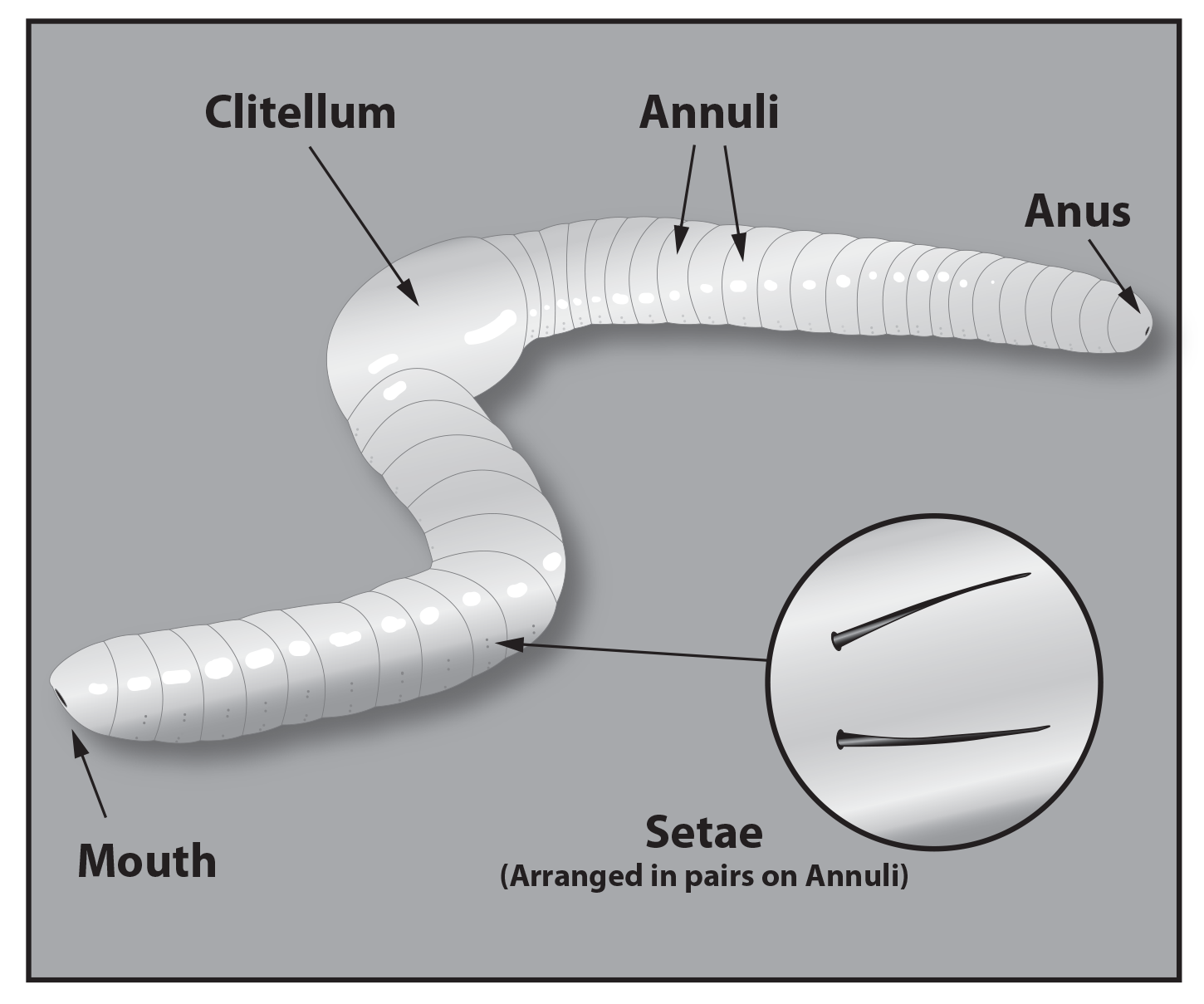 Earthworms are hermaphrodites, meaning they have both female and male reproductive parts. After mating, earthworms lay eggs inside a cocoon covering that hatches in about two or three weeks, but this can vary depending on species and weather conditions. Baby worms are called wormlets and look like tiny pieces of thread when newly hatched.

In addition to improving soil and decomposing waste, earthworms are important food for a variety of animals such as birds, snakes, amphibians, rodents, and other small animals.

Several days before starting construction of the worm habitats, introduce the project to the class so students have time to gather materials from home. Have students bring plastic bottles, soil, and worm food as identified on the attached instruction sheet, Directions for Earthworm Habitat Construction and Observations. Students will work in pairs and should decide which partner will be in charge of providing the listed items from home.

During this introduction, brainstorm answers to the following questions with the class and keep a list of ideas on the board:

Instruct students to transfer the notes from the class brainstorm onto the graphic organizer called, An Earthworm’s Dirty—but Important—Job. Also, have students fill out the Earthworm Project Agreement showing that they understand the rules for caring for the earthworms in the habitats the class will create. Discuss the rules as a class and collect the signed Earthworm Project Agreement.

This lesson was updated in 2013 with funding from California Foundation for Agriculture in the Classroom and a grant from the California Department of Food and Agriculture’s Fertilizer Research and Education Program. The Fertilizer Research and Education Program (FREP) funds and facilitates research to advance the environmentally safe and agronomically sound use and handling of fertilizer materials. FREP serves growers, agricultural supply and service professionals, extension personnel, public agencies, consultants, and other interested parties. FREP is a part of the California Department of Food and Agriculture (CDFA), Division of Inspections Services.