Peas in a Pod

Students explore the concept of inherited traits and understand the significance of Gregor Mendel's discoveries related to heredity. Grades 3-5

*These items are included in the Pompom Punnett Square Kit, which is available for purchase from agclassroomstore.com.

dominant gene: a gene that can hide the effect of a recessive gene

inherited: derive a quality or characteristic genetically from one's parent or ancestors

organism: any living thing made of cells

purebred: the offspring produced by parents of the same breed

recessive gene: a gene whose expression can be hidden

species: a group of organisms sharing common traits that can produce offspring together

In the 1850s, an Austrian monk named Gregor Mendel started a series of experiments with garden peas. Mendel was fascinated with plants and was curious about why some pea plants had different physical characteristics than others. For more than ten years, Mendel carried out thousands of experiments on pea plants that laid the foundation for the study of heredity.

At the time of Mendel’s studies, it was a generally accepted belief that traits were blended. It was believed that the offspring of a tall parent and a short parent would have medium-sized height. Mendel’s work showed that traits are not blended; they are passed on intact. He discovered that traits can skip a generation and are either dominant or recessive. Mendel also discovered that traits can be passed on independently of other traits. For example, the size of a pea plant does not affect the color of the plant’s flower. The importance of Mendel’s discoveries went largely unrecognized until the early 1900s when other scientists, who made many of the same observations, rediscovered his work.

Mendel’s decision to study peas is significant. Pea plants are a good choice for study because they produce a large number of offspring, and it is easy to control their pollination. Pea plants also have many traits that exist in only two forms. Mendel selected seven characteristics to study; purple or white flower color, flowers positioned on the top or the side of the stem, smooth or pinched seed pod, yellow or green pod color, yellow or green seed color, round or wrinkled seeds, long or short stems. Mendel studied each trait and learned how they were passed down to the offspring plant.

Gregor Mendel was the first scientist to determine that the mathematic principles of probability can be used to predict the outcomes of genetic crosses. In 1905, English geneticist Reginald Punnett created what is now known as the Punnett square to illustrate some of Mendel’s discoveries. A Punnett square is a chart that shows all possible gene combinations in a cross. This visual representation of Mendelian inheritance was designed as a teaching tool and helps explain how the laws of probability apply to genetics. 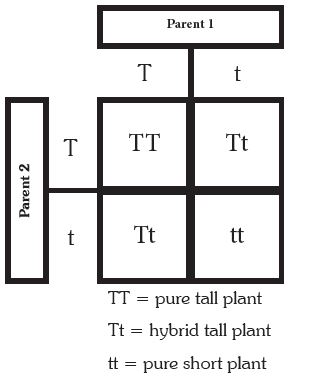 For each inherited trait, the offspring has two genes­—one from each parent. If both genes are either dominant or recessive, the trait is called a purebred trait. If only one gene is dominant, the combination is called a hybrid trait. The Punnett square to the right shows a cross between two hybrid tall pea plants. T represents the dominant gene for tall and t represents the recessive gene for short. When two hybrid tall pea plants are crossed, three-fourths of the plants are tall, and one-fourth are short. You can predict that there is a 75% probability the offspring will be tall and a 25% probability the offspring will be short.

Mendel’s discovery has had, and continues to have, a great impact on agricultural development. Understanding Mendelian Genetics enables animal and plant breeders to produce new, improved, and higher yielding varieties with more accuracy. These genetic advances, in addition to improvements in farm management, have led to significant increases in agricultural productivity.

History Standard 8A (Grades 3-4): The development of technological innovations, the major scientists and inventors associated with them and their social and economic effects.