Students will investigate the impact of cotton on the history and culture of the United States. Students will discover the growth and processing requirements for cotton, recognize how the invention of the cotton gin affected slavery, explain how the plantation system was organized, and ultimately understand the role of cotton in the Civil War. Grades 9-12

Supporting Question 1: Why did plantation owners in the South want slaves?

Supporting Question 2: How did the invention of the cotton gin affect slavery?

Supporting Question 3: How was the plantation system organized?

Supporting Question 4: What role did cotton play in the Civil War?

boll: the part of a cotton plant that contains the seeds; the pod or capsule of some plants, such as cotton and flax

gin: to separate cotton fiber from seeds and waste material 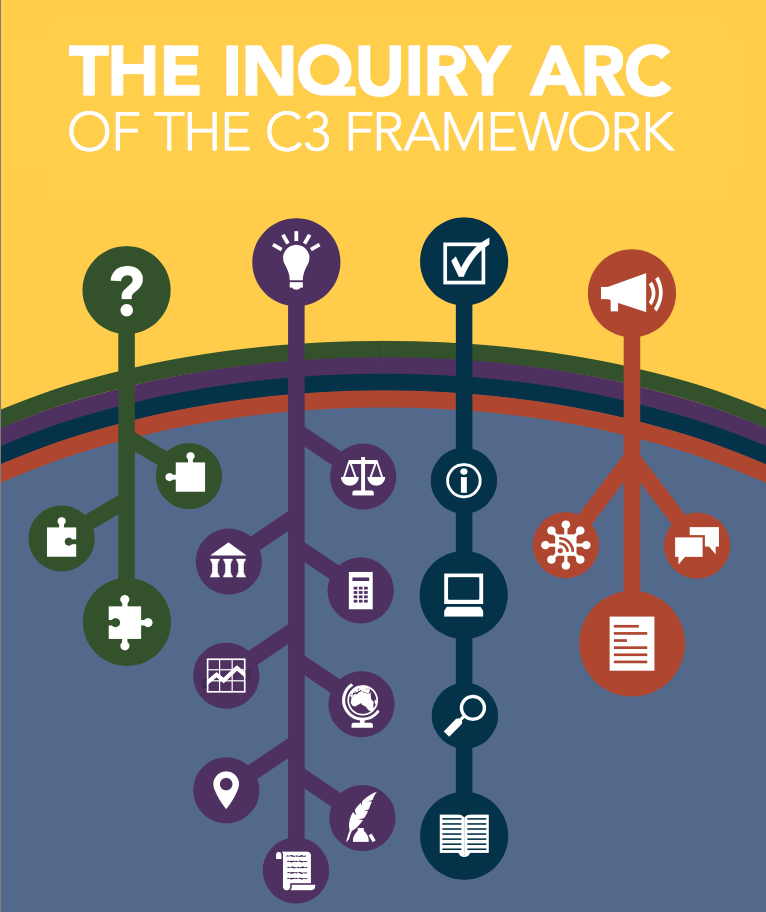 Cotton's American Journey uses the College, Career, and Civic Life (C3) Framework's Inquiry Arc as a blueprint to lead students through an investigation of the impact of cotton on the history and culture of the United States. The Inquiry Arc consists of four dimensions of informed inquiry in social studies:

The four dimensions of the C3 Framework center on the use of questions to spark curiosity, guide instruction, deepen investigations, acquire rigorous content, and apply knowledge and ideas in real world settings to become active and engaged citizens in the 21st century.1 For more information about the C3 Framework, visit socialstudies.org.

It’s common knowledge that slavery was a source of conflict between the North and South leading up to the Civil War. But why did the South want or need slaves? Cotton. By examining this important crop, your students will learn how cotton influenced the slave trade, slave culture, economic policies, the Civil War, and the industrial revolution.

Cotton picking was a job given to healthy, adult slaves. These slaves handpicked cotton in the fields all day. Then by candlelight, they would join the elderly, infirm, or children to gin the cotton by hand. Ginning cotton means removing the lint or fiber from the seed. The more lint one removed from the seed, the more profit could be made from each boll. It would have been important for slaves to remove as much lint as possible from each seed. Your students may find anywhere from fourteen to forty-two seeds per boll, as did the slaves. A slave could gin approximately one pound of cotton a day, or about 120 cotton bolls. After completing the following classroom activity, your students will be able to determine how many bolls of cotton they would need to make one pair of jeans.

Eli Whitney is generally credited with the invention of the cotton gin. His idea for this machine came while he was watching a cat try to catch a chicken in the barnyard. The cat’s unsuccessful attempt left him with a claw full of feathers and no chicken (more details about Eli Whitney’s machine can be found in the book Guns, Germs, and Steel by Jared Diamond). Whitney decided to try a similar approach with cotton, creating a gin operated by hand-crank that would rake the seeds from the fiber. In 1794, his machine was patented, revolutionizing the production of cotton. One slave could now gin fifty pounds of cotton per day. Did this mean plantation owners needed fewer slaves? No, but it did make cotton a more profitable crop because less time was required for ginning. Plantation owners now wanted more slaves to grow more cotton.

Cotton production increased across the South following the invention of the cotton gin. At the same time, factories that could process cotton were being built across the north. Unlike wool, which is a very long and scale-like fiber, cotton is a short and smooth fiber. These physical differences make wool easier to spin into thread than cotton, either by hand or by machine. Spinning cotton by hand is time consuming and difficult. Wool, and to some extent linen, was the fabric of choice until machine technology made the production of cotton thread viable. Cotton production in the South was only economical or possible with the manufacturing industry of the North. The Southern economy had virtually no manufacturing and was based solely on production.

Cotton requires a long, warm growing season, meaning it cannot be grown in colder, northern climates. Today, cotton is grown across the southern United States from Virginia to California. Cotton also requires ample water but grows well in the arid southwest with modern irrigation technology. California is well-known for their America Pima cotton, which produces a finer, more expensive fiber than the more common American Upland cotton. Cotton gins are now very large machines that work much faster than Eli Whitney’s simple machine. What happens to all the cottonseed after it is ginned? Most of those fuzzy seeds are fed to dairy cattle or processed into cottonseed oil, which can be found in nearly every kind of snack food, including chocolate candy bars.

Compelling Question: How did cotton impact the history and culture of the United States?

Supporting Question 1: Why did plantation owners in the South want slaves?

Supporting Question 2: How did the invention of the cotton gin affect slavery?

Supporting Question 3: How was the plantation system organized?

Supporting Question 4: What role did cotton play in the Civil War?

Utah Agriculture in the Classroom and National Center for Agricultural Literacy

History Era 4 Standard 2D (Grades 9-12): The rapid growth of 'the peculiar institution' after 1800 and the varied experiences of African Americans under slavery.

History Era 5 Standard 1A (Grades 9-12): The North and South differed and how politics and ideologies led to the Civil War.