Students will engage with the Growing a Nation timeline to explore the significant historical and agricultural events and inventions from American history during the years 1600-1929. Students will recognize the importance of labor in agriculture, discover how the implementation of technology increased agricultural production, and explore the role that cotton and wool played during this era. Grades 9-12

*These items are included in the Wool Spinning Kit, which is available for purchase from agclassroomstore.com. A Wool Refill Kit is also available.

boll: the part of a cotton plant that contains the seeds; the pod or capsule of some plants, such as cotton and flax

cotton gin: a machine that separates the seeds, seed hulls, and other small objects from the fibers of cotton

Seeds of Change (1600-1929) is the first story event in the Growing a Nation online interactive timeline. The timeline provides a chronological presentation of significant historical events focusing on the important role agriculture has played in America's development. Growing a Nation uses a graphic organizer (timeline) and online multimedia resources to bring depth and meaning to historical events. The interactive timeline and lesson plans merge seamlessly with existing American history textbooks and high school history curricula.

In the Good Old Days

In the “good old days” a country kid would help milk the cows, collect fresh eggs, feed the pigs, and pick some berries for breakfast. Today, with less than 2% of the population in the United States involved in agriculture, most of your students get milk from cartons, strawberries from a box in the freezer, and their morning routine involves nothing more than choosing their favorite box of cereal from the cupboard. Their connection to their food has been reduced to a visit to the grocery store. But things may be changing. Farmers’ markets are springing up everywhere, bringing fresh produce, meat, dairy products, and baked goods even to city dwellers. Community supported agriculture programs involve people in growing and harvesting their own food. Everywhere, plots of land are being set aside for community gardens with local libraries checking out tools along with books to get people started growing some of their own food. Many schools are developing innovative educational programs centered on school gardens. And throughout the country, farm “bed and breakfasts” have become popular. Some even offer family vacations where you can become “Old MacDonald” for a week. So even if you don’t live in the country, take the opportunity to become part of agriculture today, and enjoy “the good new days!”

If you ask someone “What was the cause of the Civil War?” chances are they will answer “slavery.” True, but why did the South want or need slaves? Cotton. By examining this important crop, your students will grasp and be able to relate how cotton influenced the slave trade, slave culture, economic policies, the Civil War, and the Industrial Revolution. Cotton picking was a job for healthy adult slaves. Generally, these slaves would hand pick cotton in the fields all day and then, by candlelight, they would join the elderly, infirm, or children to gin the cotton by hand.

Ginning cotton means to remove the lint or fiber from the seed. It is important to remember that the more lint one removed from the seed, the more profit from each boll. It would have been important for slaves to remove as much lint as possible from each seed. Your students may have anywhere from 12-42 plus seeds per boll, as did the slaves. A slave could gin one pound of cotton a day. After completing the following classroom activity, your students will be able to determine how many bolls of cotton they would need to make one pair of jeans. In fact, about 120 ginned cotton bolls weigh only one pound. Eli Whitney is generally credited with the invention of the cotton gin (1793). His idea for this machine came while he was watching a cat trying to catch a chicken in the barnyard. The cat’s unsuccessful attempt left him with a claw full of feathers and no chicken. Whitney decided to try a similar approach with cotton. He basically wanted to “rake” the fiber from the seeds. His machine, operated by a hand-crank, revolutionized the production of cotton.

With the invention of the cotton gin, one slave could gin 50 pounds of cotton a day. Did this mean plantation owners needed fewer slaves? No, this machine meant cotton was a more profitable crop. Now plantation owners needed more slaves to produce more cotton. This was important to Southerners because their “production only” economy was in a slump. They had virtually no manufacturing. Factories for making fabric (textiles) were primarily in the North and in England.

Unlike wool, which has a very long and scale-like fiber, cotton is a short and smooth fiber. These physical differences make wool easier to spin into thread than cotton, either by hand or machine. Spinning cotton by hand is time-consuming and difficult. Wool, and to some extent linen, was the fabric of choice until machine technology made cotton thread production viable. Cotton production in the South was only economical as long as they could sell it to textile manufacturers in the North. 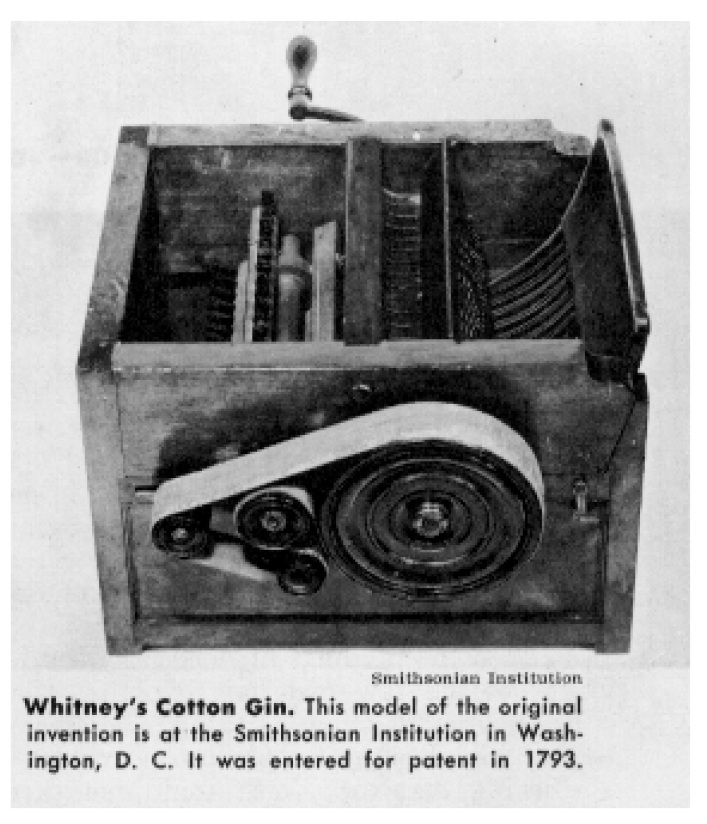 Today, the United States ranks third in the world for cotton production.1 The largest cotton producing states are Texas, Mississippi, and Georgia. Cotton is even an important crop in the West. Arizona and California are well-known for their Pima cotton, which is a finer, more expensive cotton fiber. Cotton gins are now very large machines that do the work much faster than when it was done using Eli Whitney’s simple machine. And what do we do with the mountains of cottonseed after it is ginned? Most of those fuzzy seeds are fed to dairy cattle or processed into cottonseed oil, which can be found in nearly every kind of snack food including chocolate candy bars.

Wool played an important role in colonial America. Before the Revolutionary War, most of the finest textiles and fashionable styles were imported from Great Britain. Many colonists wanted to produce their own clothing and textile goods. Wool and linen were the most common materials used. Homespun clothes, clothes that were produced by the colonists, reduced the amount of clothing that had to be bought from England.

Wool cloth is woven from yarn that is spun from the fibers grown as the thick fleece of sheep. Once a year, sheep have their fleeces cut off, or sheared. In colonial times, the sheep were sheared in early spring using hand clippers. The wool was cleaned through a process called scouring in which the wool underwent a series of baths before it was laid out to dry. Wool grease is produced as part of the wool's growth and helps protect the sheep's wool and skin from the environment. Scouring removes this grease from the wool.

In preparation for spinning, wool must be carded. The colonists used hand carders to comb the wool, remove debris, and untangle the fibers, aligning them parallel with each other. Colonists used dye formulas that included insects, roots, flowers, nuts, seeds, tree bark, leaves, or berries. Because of the toxic chemistry, many of these colonial dyes have been deemed unsafe in our era. The dyeing process involved soaking wool in kettles of dye over fires for several hours.

Wool was spun into thread or yarn by tightly twisting the fibers using a spinning wheel. Weavers turned the wool thread into cloth using looms. Wool was also felted, a process of matting fibers together, to make products such as hats and slippers.

History Era 4 Standard 2D (Grades 9-12): The rapid growth of 'the peculiar institution' after 1800 and the varied experiences of African Americans under slavery.

World History Era 7 Standard 5A (Grades 9-12): Connections between major developments in science and technology and the growth of industrial economy and society.