Fertilizers and the Environment (Grades 9-12)

Students will recognize that fertile soil is a limited resource, describe the role fertilizer plays in increasing food productivity, distinguish between organic and commercial fertilizers, describe how excess nutrients are harmful to the environment, and identify different sources of nutrient pollution. Grades 9-12

algal bloom: a rapid increase in the population of algae in a given area of water, which often causes the water to look green

fertilizer: any material of natural or synthetic origin that is applied to soils or plant tissues to supply one or more nutrients essential to plant growth

non point source: nutrient pollution that results from runoff and enters surface, ground water, and the oceans from widespread and distant activities

point source poluution: nutrient pollution that comes from a specific source that can be identified such as a factory or a wastewater treatment plant

See the Background section of the lesson Plant Nutrient Deficiencies for further information.

Fertilizers and the Environment

Nutrients provide the basic building blocks of life for all organisms. Proper nutrient application, through fertilizer, improves plant growth and crop yield. However, the nutrient cycle is very complex and humanity is still developing an understanding of the scientific details. Because nutrients occur naturally in the environment, fertilizer application augments nature’s processes. Challenges arise when nutrients, through nitrogen-containing fertilizer, are applied improperly. If nutrients are applied at the wrong rate, in the wrong place, from the wrong fertilizer source, or at the wrong time, then the nutrients may be lost to the environment before the plant(s) can take them up and use them for growth. In such cases, nutrients can be lost from the field either through runoff (water) or through gasification and evaporation (air). In the case of runoff, nutrients can be lost to streams, rivers, lakes, and eventually the oceans. While the hydrologic cycle is very complex, excess nutrients in surface waters can promote growth of algae, which in turn can reduce oxygen concentrations in the water and degrade the overall water quality. In the case of gasification and evaporation, nitrogen is broken down by soil bacteria, is converted to N2O, and moves into the atmosphere as a greenhouse gas.

Nutrients are a natural part of the environment and enter the biosphere from weathering and erosion processes. Nutrients can enter the environment through agriculture, sewage and wastewater treatment plants, coal-burning power plants, storm water runoff, and automobile exhaust. Nutrient sources vary greatly between urban and rural areas. Controlling nutrient loss means identifying its various sources and implementing policies that limit the loss of nutrients to the environment.

As discussed earlier, organisms require essential nutrients to survive, but they must be present in the proper amounts. Either too little or too much can adversely affect health. A similar situation exists with regard to the environment. The U.S. Environmental Protection Agency (EPA) estimates that almost 20 percent of the nation’s lakes and 30 percent of streams have high levels of nitrogen and phosphorous pollution. This type of nutrient pollution can cause massive overgrowth of algae. These so-called algal blooms also damage water quality. When large populations of algae die and decompose, they deplete the dissolved oxygen in the water. Marine animals that depend on this oxygen either die or leave the area.

Some species of algae emit toxins that can cause rashes, stomach aches and more serious problems for humans. The most severe acute health effect is methemoglobinemia, often called “blue baby syndrome”. Recent evidence suggests that there is not a simple association between nitrate and blue baby syndrome, rather that nitrate is one of several interrelated factors that lead to methemoglobinemia. The disease is uncommon in the United States because potential exposure to high levels of nitrate is limited to a portion of the population that depends on groundwater wells, which are not regulated by the EPA. Public drinking water systems should contain nitrates at a level safe for consumption as nitrates can be removed by water filtration. Nitrogen pollution from cultivated soils, industry, and other sources contributes to global warming because a portion is released into the atmosphere as nitrous oxide (N2O), a powerful greenhouse gas.

Excess nutrients can enter the environment through both natural and human-induced mechanisms. Sources of nutrient pollution are classified as being either point sources or non point sources.

Point sources of nutrient pollution can be tied to specific locations. Typical point sources include factories, power plants, and wastewater treatment plants. In urban areas, wastewater treatment facilities can be the largest contributors to nutrient pollution. For example, in Long Island Sound off the East Coast, an estimated 60 percent of the nitrogen that enters the water comes from sewage discharge leaving New York City.

Non point sources of nutrient pollution are general sources such as agricultural areas, cities, and automobiles (golf courses, lawns, anything without a distinct discharge point). A major non point source of nutrient pollution is urban development. For example, clearing of land for housing and industry creates sealed surfaces that do not absorb water and increase nutrient-laden runoff. A related non point source of nutrient pollution is the septic systems that have proliferated as the suburbs extend beyond the reach of urban sewer systems. Automobile exhaust is another non point source. This exhaust releases nitrogen into the atmosphere, but it returns to Earth’s surface with the rain. Although definitive information is hard to come by, it has been estimated that up to 40 percent of the nitrogen entering aquatic environments in some areas can come from nitrogen in the air. Agriculture is also a non point source for nutrient pollution. Use of fertilizers can send excess nutrients into the environment, particularly when best practices are not used. To avoid introducing nutrient pollution, fertilizers must be applied using the right source, rate, time, and place. Increasingly, farmers are adopting nutrient management and precision agriculture measures that minimize the amount of this pollution.

During the past 40 years, antipollution laws have been enacted to reduce the amounts of toxic substances released into our waters. States, territories, and tribes set water-quality standards. They classify a given water body according to the human uses the water quality will allow—for example, drinking water supply, contact recreation (swimming), and aquatic life support (fishing)—and the scientific criteria to support those uses. The Federal Clean Water Act mandates that if a water body is impaired by a pollutant, a total maximum daily load (TMDL) must be created. Total maximum daily load is a calculation of the maximum amount of a pollutant that a water body can receive and still meet water quality standards, and an allocation of that amount to the pollutant’s sources. A TMDL is the sum of the allowable loads of a single pollutant from all contributing point and non point sources. The calculation must include a margin of safety to ensure that the water body can be used for the purposes the state has designated, such as swimming and fishing. The calculation must also account for seasonal variation in water quality.

Growing concern about algae in surface waters has led some local municipalities to begin regulating lawn fertilizers. Areas in Florida, Illinois, Maine, Maryland, Michigan, Minnesota, New Jersey, New York, Vermont, Virginia, Washington, and Wisconsin have enacted ordinances limiting the phosphorus in lawn fertilizers. In Ontario, Canada, the township of Georgian Bay passed a bylaw banning the application of fertilizer. The merit of such legislation is still under debate. However, manufacturers are responding by offering fertilizer grades with lower amounts of phosphate. Will these approaches be effective in improving water quality in our rivers, lakes, and reservoirs? The principles of nutrient management that have been developed for agricultural fertilizers also apply to lawn fertilizers. With soil testing and wise application, such as more frequent applications at lower doses, nutrient losses can be reduced. 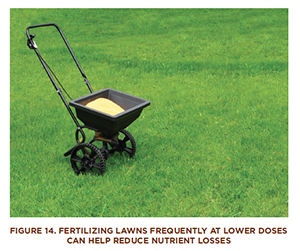 Perhaps surprisingly, fertilizers can have a positive impact on the environment with regard to land use. Land is a finite resource, and human societies use it for a variety of purposes. We need land for residential living, for industries, for recreation, for wildlife habitats, and of course, for growing food and fiber. Land cultivation worldwide has remained about the same for the past 50 years. Although subsistence farmers in developing countries have brought some additional land into production, land has also been lost to expanding cities in the developed countries. Even so, starting in the 1960s, farmers have increased food production about 400 percent. The Green Revolution was made possible largely by three innovations: better crop varieties, use of commercial fertilizers, and better water management practices. The economist Indur Goklany calculated that if we needed to feed today’s population of over 6 billion people using the organic methods in use before the 1960s, it would require devoting 82 percent of Earth’s land to farming.

Clearly, if we are going to produce adequate food for our growing population, then crop yields will need to further increase. Strategies will have to be developed to meet the challenges of the future. Some farmers are using technology in a variety of ways to increase crop yields. While the utilization of these new technologies is growing, it is not occurring today on most of the nation’s farms, although adoption is growing. The rest of this section describes some of these technologies.

The ultimate goal of this research is to give non legume plants the ability to obtain their own nitrogen from the atmosphere (i.e., to “fix” nitrogen from the atmosphere) and not rely as heavily on added fertilizers. However, giving a corn plant the ability to fix nitrogen would involve adding a large number of genes not only from nitrogen-fixing bacteria but also from an appropriate host plant. The prospect of achieving this anytime soon is remote. Scientists have succeeded in helping plants better use nitrogen by increasing the expression of a single gene. For example, plants that highly express the enzyme glutamate dehydrogenase have been shown to grow larger than those that were not modified to do so. Of course, genetic scientists are not limiting their efforts to nitrogen fixation. A wide variety of crop plants have been engineered to grow faster, tolerate unfavorable environments, resist pests, and have increased nutritional value.

Teacher Note: This activity uses an apple as a model of Earth. The Apple Land Use Model can be used as an alternative demonstration option. Students discuss the various ways people use land and make predictions about what percentage of Earth’s land is needed to grow our food. After discussing the ways in which land is used (Step 2), you may consider having the students create their own pie charts where they predict the percentages associated with different land uses, especially farming. Later, their predictions can be compared with the actual values revealed by the apple demonstration.

In this activity, students use a world population projection to consider how much additional farmland will be needed to feed humans in the year 2050.

Activity 3: Fertilizers and the Future

In this activity, students identify advantages and disadvantages of using organic and commercial fertilizers. They also consider how to minimize nutrient pollution.

Teacher note: The readings about organic and commercial fertilizers are brief. The information is not meant to be comprehensive. Rather, it is designed to challenge students’ critical-thinking skills and provide opportunities for them to construct explanations supported by evidence.