A Tale of Two Burgers: Beef and Plant-based Protein

Students will compare the components of beef and plant-based burgers by determining the production and processing methods of each product; evaluate the ingredients and nutritional differences between beef and plant-based products; and discuss different points of view in the agricultural industry concerning plant-based proteins and traditional beef. This lesson covers a socioscientific issue and aims to provide students with tools to evaluate science within the context of social and economic points of view. Grades 9-12

Beyond Burger : a plant-based alternative that looks and cooks like beef, but does not contain heme or soy

burger: a round patty of ground beef or plant-based products

heme: an iron-containing molecule found in every living plant and animal that looks and tastes like blood

Impossible Burger : a plant-based alternative to traditional beef burgers that contains heme and mimics the flavor, aroma, and texture of beef

leghemoglobin : an oxygen carrier and hemoprotein found in the nitrogen-fixing root nodules of leguminous plants

meat: the muscle of an animal used as food

yeast: a microscopic fungus consisting of single oval cells that reproduce by budding, and are capable of converting sugar into alcohol and carbon dioxide

Plant-based protein is on the rise and alternative burgers are showing up on fast-food menus. As more and more meatless alternatives become available, consumers may be faced with various questions and concerns. What is a plant-based burger? How does the Impossible Burger compare to a Beyond Burger? Are meatless burgers a healthier alternative?

Many consumers have enjoyed plant-based proteins—like veggie burgers—for years, but why the sudden surge of popularity? Companies like Impossible Foods and Beyond Meat have revolutionized the plant-based industry by creating meatless burgers that actually look, cook, smell, and taste like beef. These taste- and lookalike burgers also come advertised as a more environmentally friendly protein alternative, and a possible solution to feeding our growing population.

Humans began eating beef (domesticated cattle) in 6,500 B.C. Beef cattle have since played an important role in agricultural production. Because of their ruminant digestive system, cows have the unique ability to upcycle human-inedible forages and byproducts. Feeds like grass, cottonseed meal, and distillers’ grain are upcycled into high-quality cuts of protein, iron, and zinc. What most consumers don’t realize is that all cattle spend the majority of their lives eating grass and forage products. Calves are raised with their mother on pasture or grass until they are between 6-12 months of age. After weaning, cattle are then fed grain and/or more forages to a finishing weight (1,200-1,400 pounds) for harvesting. A 1,200-pound steer will produce about 500 pounds of meat including steaks, roasts, and ground beef.5 The remaining byproducts from the beef carcass are used for common objects such as leather, pet foods, cosmetics, detergents, glue, and brake fluid.

Beyond Meat began in 2009 and their plant-based “Beyond Burger” debuted in 2016. The protein in a Beyond Burger comes from a combination of pea, mung bean, and rice protein. The red color of the meat—to resemble beef—comes from beets. Other ingredients in this popular patty include water, expeller-pressed canola oil, refined coconut oil, natural flavors, cocoa butter, methylcellulose, potato starch, apple extract, salt, potassium chloride, vinegar, lemon juice concentrate, sunflower lecithin, and pomegranate fruit powder. Beyond Meat advertises a plant-based protein that is soy, gluten, and GMO free.

Impossible Foods was founded in 2011 and their plant-based “Impossible Burger” first hit fast-food menus in 2019. The Impossible Burger is a stand-out from other plant-based burgers because the burger patty “bleeds” like a regular beef burger. This is done using an iron-containing molecule found in every living plant and animal known as heme. Scientists discovered that heme is what gives meat its aroma and flavor. It is also what humans crave when eating meat. Soy leghemoglobin (legume hemoglobin) is a protein found in plants that carries heme. In the past, researchers at Impossible Foods harvested leghemoglobin directly from the roots of soy plants; however, they soon realized they could produce much more leghemoglobin using fermentation. Leghemoglobin is now harvested using a yeast engineered with the gene for soy leghemoglobin. The genetically engineered yeast ferments and multiplies, creating large amounts of soy leghemoglobin which contains heme. The heme is then isolated from the yeast and mixed with other ingredients to create the meaty flavor in the Impossible Burger. This process of using genetically engineered yeast allows Impossible Foods to produce heme on a large scale without digging up soy roots, promoting soil erosion, and releasing carbon from the soil.11

Are plant-based burgers a healthier alternative?

There are many burger options available to consumers whether they are plant-based or made from beef. While plant-based and meatless burgers are a good alternative, they might not meet the same amino acid, vitamin, mineral and antioxidant levels that are found in an eight-ounce piece of red meat.2 Consumers can get 100% of the daily intake of vitamin B12 from one serving of red meat, while a Beyond Burger will account for 20% of the daily intake of B12.2 The sodium content of each burger varies as well. A Beyond Burger contains 380 milligrams (mg) of sodium, the Impossible Burger contains 370 mg of sodium, and a freshly ground beef burger (85% lean) contains 90 mg of sodium.2 Plant-based burger patties, however, contain significantly less cholesterol when compared to a beef patty. Consumers should be aware of the production and processing methods of each burger, as well as ingredients and nutrient content so they can select a burger that fits their dietary needs and preferences. Those who are allergic to soy should avoid eating plant-based products that contain soy leghemoglobin. 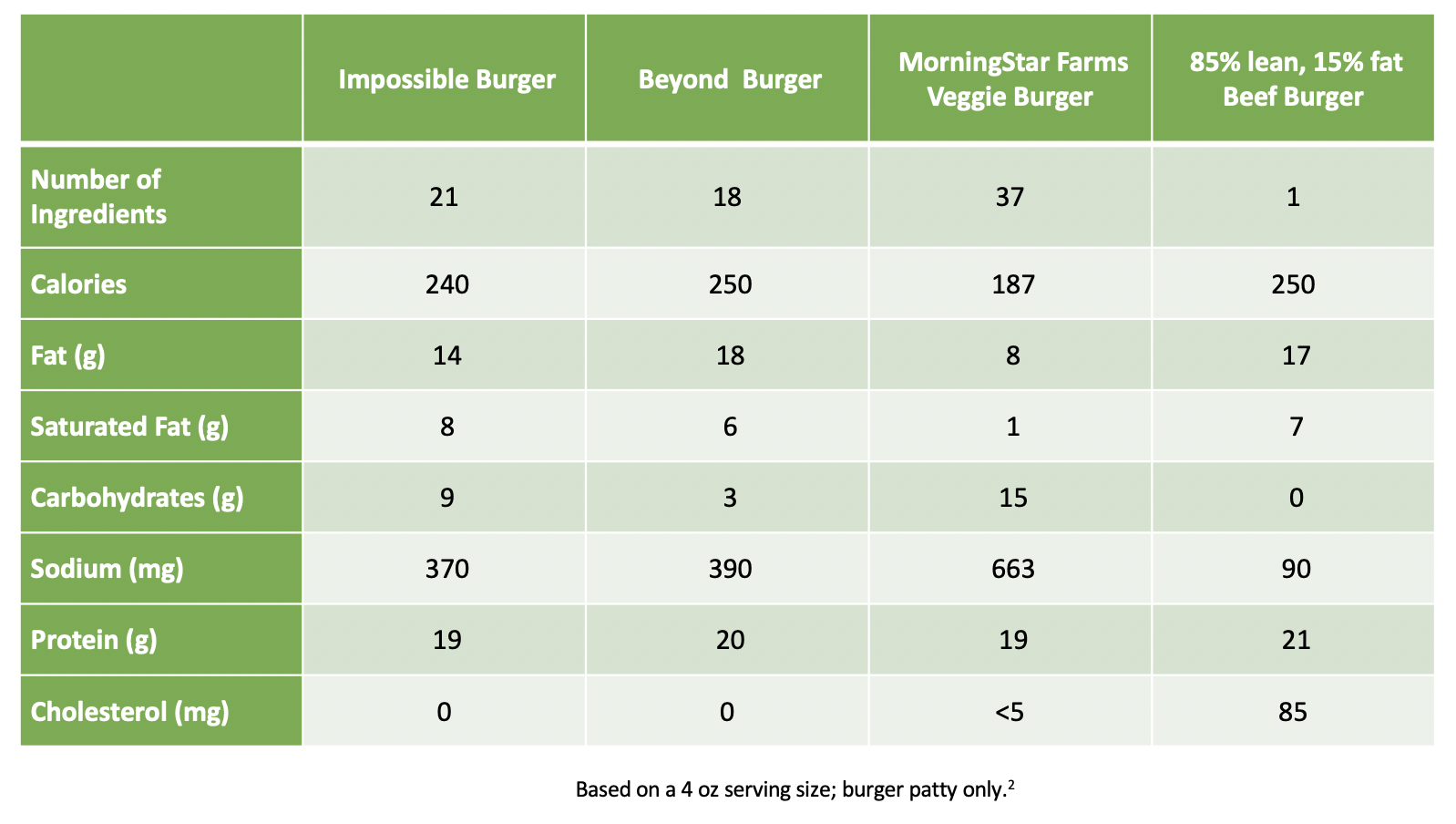