Stacking Up Milk and Milk Substitutes

Students will compare and contrast milk and plant-based milk substitutes by learning their source from farm-to-table and discovering how they "stack-up" in nutritional value. Students will also explore food package labeling laws and consumer trends in milk consumption to think critically about the impact of labels in marketing and consumer perceptions of food. Grades 9-12

Activity 1: Stacking Up Nutrition in Milk and Milk Substitutes

Activity 2: The "Milk" Debate and the Impacts of Labeling

Food and Drug Administration (FDA): a federal agency in the United States responsible for protecting the public health by ensuring the safety, efficacy, and security of human and veterinary drugs, biological products, medical devices, and the safety of our nation's food supply

fortify: to increase the nutritive value of food, usually with vitamins or minerals

lactase: an enzyme produced by the large intestine which breaks down lactose

lactase persistence: the ability to continue to produce lactase into adulthood

lactose: a disaccharide sugar present in milk which contains glucose and galactose units

milk: an opaque white fluid rich in fat and protein, secreted by female mammals for the nourishment of their young

Milk is defined by the Food and Drug Administration (FDA) as the lacteal secretion from a mammal.4 In order to properly digest milk, the body needs to have an enzyme called lactase to digest the sugar, lactose, found in milk. Babies are born with this enzyme allowing them to digest their mother’s milk. Today approximately 35% of adults across the world still produce lactase allowing the digestion of milk. Although this varies largely based on cultural descent. For example, 95% of northern Europeans are lactose tolerant, while only 10% of adults of east Asian descent still produce the lactase enzyme.11 Historical evidence suggests that the lactase enzyme turned off at the time of weaning for our ancient ancestors.5 The use of milk beyond childhood didn’t begin until about 10,000 BC when humans started to switch from hunter gatherers, to those that farmed and settled in communities. As animals became domesticated, people began using their milk by-products. First, they fermented milk to make cheese and yogurt, which was digestible without their body’s production of lactase. As milk, and milk by-products, started to become part of their diet, lactase persistence, or the ability to continue to produce lactase into adulthood, became more widespread. There was a strong selective advantage for individuals to be able to digest milk and benefit from its nutrition beyond the intake of their mother’s milk, especially in times of crop failure, drought, or famine.6 For more details, see Archaeology: The Milk Revolution.

The nutritional benefits of dairy products have been outlined by the United States Department of Agriculture (USDA) and Department of Health and Human Services (DHHS) 2015 dietary guidelines. These organizations include fat-free and low-fat (1%) dairy, including milk, yogurt, and cheese as part of a healthy diet. Recommended intake is based on age rather than calorie level and are 2 cup-equivalents per day for children ages 2 to 3 years, 2½ cup-equivalents per day for children ages 4 to 8 years, and 3 cup-equivalents per day for adolescents ages 9 to 18 years and for adults. The dairy group contributes many essential nutrients including: calcium, phosphorus, vitamin A, vitamin D (in products fortified with vitamin D), riboflavin, vitamin B12, protein, potassium, zinc, choline, magnesium, and selenium. Switching to dairy products that are fat-free or low-fat can reduce the amount of saturated fat in the diet without changing the nutrient content.

Dairy milk alternatives for individuals with milk allergy, or those that choose not to consume dairy products come in a wide range of plant sources with soy, almond, rice, and coconut being the most common. Soy beverage that is fortified with calcium, vitamin A, and vitamin D is the only plant-based “milk” included in the dairy food group because it is the most nutritionally similar to milk after it is fortified.7  Those who choose not to eat dairy products should make sure they consume a diet which is rich in the nutrients commonly provided by dairy (protein, calcium, potassium, magnesium, vitamin D, and vitamin A).7

Milk and milk substitutes (soy, coconut, almond, rice, etc) often carry the same "milk" name, but they vary greatly in nutrition, source, and processing. Dairy milk has the greatest number of naturally occurring nutrients. It is most often produced by cattle in the United States, but can also be produced by goats, sheep, or other mammals. The processing of dairy milk includes pasteurization, homogenization, and standardization to determine the correct percentage of milk fat (whole, 2%, 1%, or skim). Dairy milk substitutes are processed using various methods, but all share similarities in that the plant material is broken down, extracted in water, and further strained or homogenized producing a milk-like substance. Eventually it undergoes further processing to improve shelf stability, remove off-flavor, and add other flavors to promote acceptability and further imitate the appearance of dairy milk.8 Soy beverages are the only milk substitutes comparable in protein content to dairy milk. Even with these differences and the fact that milk, as defined, comes from mammals, all of these beverages carry the same label of 'milk' on the store shelves. This has led to a vast debate amongst industries as to whether this is misleading to consumers. While they can all be poured on cereal, do they stack up equally in nutrition? The dairy industry and other plant-based milk industries have discussed the matter. In 2017 the Dairy Pride Act was introduced to require the FDA to intervene and enforce labeling laws for plant-based milk substitutes.12 However, at this time, no verdict has been made on the debate to require action for the FDA to change or enforce labeling practices. This makes it even more important for consumers to learn about the products so they can make the best decision in choosing milk or plant-based alternatives.

Activity 1: Stacking Up Nutrition in Milk and Milk Substitutes 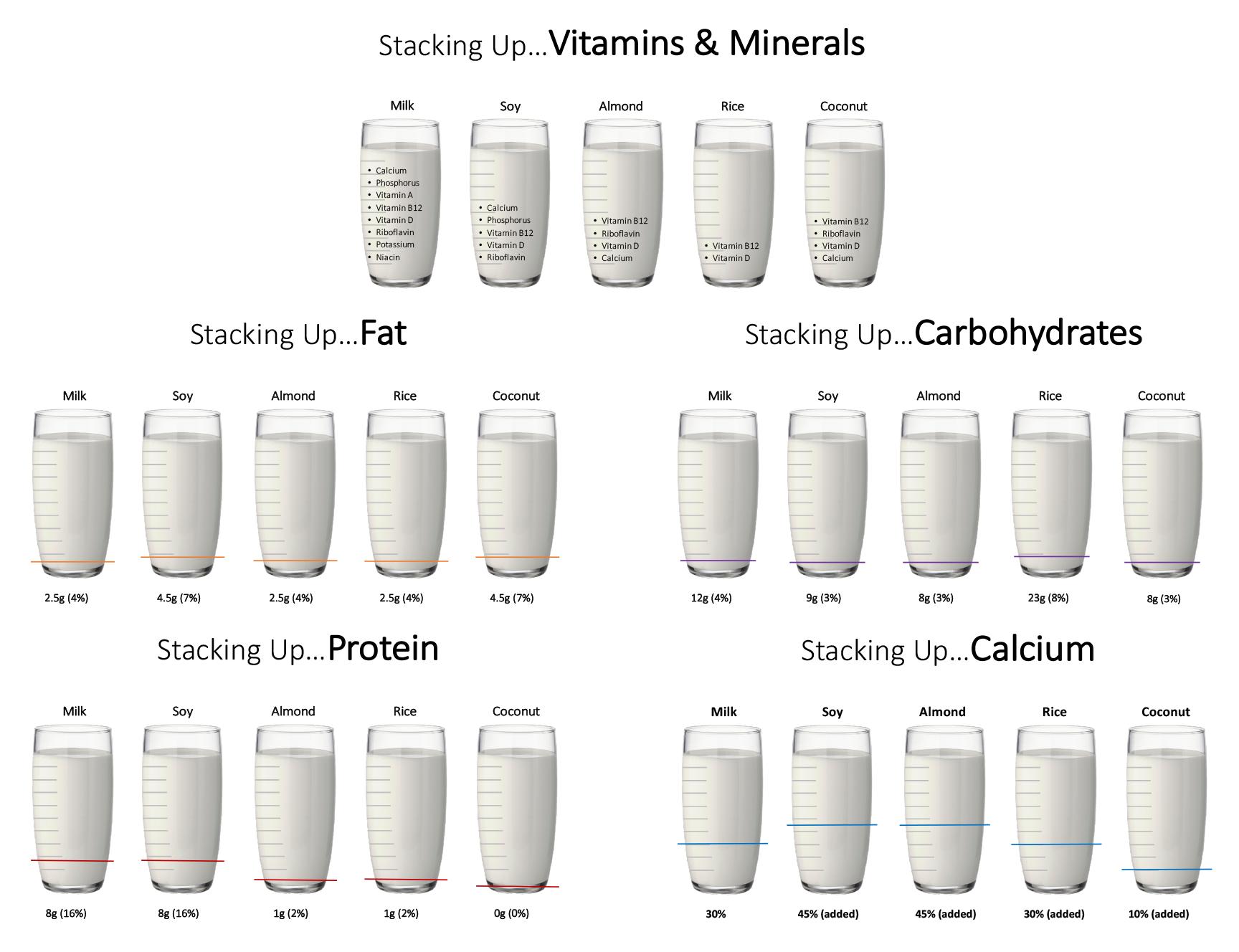 Activity 2: The "Milk" Debate and the Impacts of Labeling

After completing these activities, review and summarize the following key concepts.