Students will learn the physical components and nutritional composition of a grain, understand the function of the protein gluten in the structure of bread products, and investigate how mechanical and chemical digestion begins with salivary amylase in the mouth. Grades 6-8

amylose: a component of starch consisting of long, straight chains of glucose units

bran: the multi-layered, hard outer covering of a kernel of cereal grain

chemical digestion: the breakdown of food molecules by digestive enzymes and chemicals

complex carbohydrate: polysaccharides that contain hundreds or thousands of monosaccharide units; found in foods such as starch and fiber and have to be broken down completely for absorption

endosperm: tissue formed within a seed that contains energy (starch) and protein for the germinating seed

flour: a powdery substance obtained by grinding grain (usually wheat), which is used to make bread and many other products

germ: the embryo of a cereal grain seed

mechanical digestion: the physical act of breaking up food particles through chewing and contractions of the stomach and intestines

salivary amylase: the enzyme found in human saliva that aids in the breakdown of starch in the mouth

simple carbohydrate: carbohydrate products that contain only one or two sugar molecules; these are the quickest sources of energy because they are easily absorbed

whole grain: contains all three edible parts (the endosperm, bran, and germ) in the same proportions as the harvested grain seed before it is processed 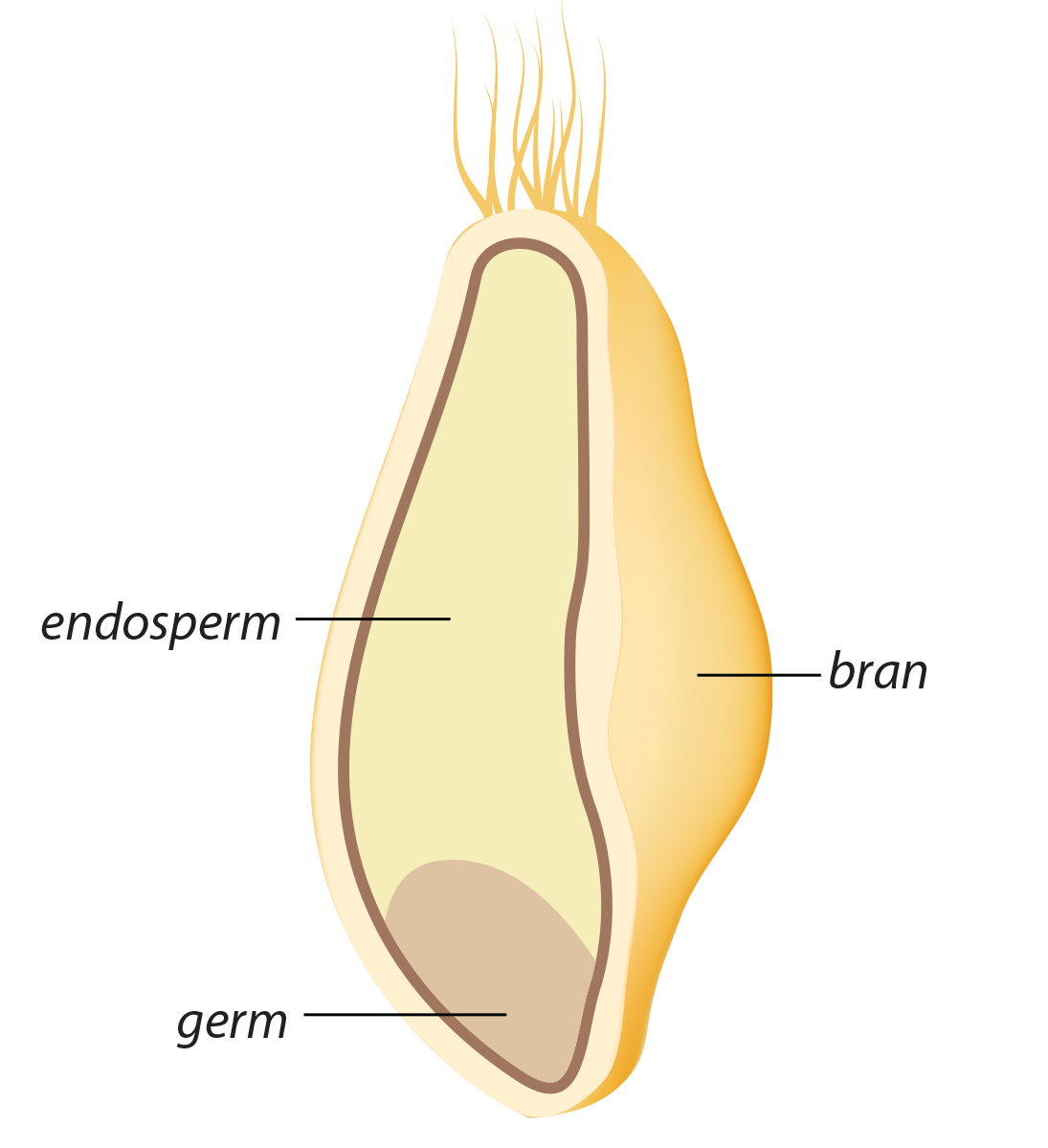 Whole grains have three parts called the bran, endosperm, and germ. The bran is the outer layer of the kernel. It contains antioxidants, B vitamins, and fiber. The germ is the embryo, which can be used to sprout a new plant. It contains B vitamins, some protein, minerals, and healthy fats. The endosperm is the food supply for the germ. It is the largest portion of the kernel and contains carbohydrates (starches), protein, and some vitamins and minerals. If grains are not whole, they have been refined. This process strips the kernel of the bran and germ to extend shelf life. This process removes many of the nutritional benefits, including the antioxidants.

Iodine can be used to detect starch. The iodine molecule moves inside the starch chain, producing a deep blue color. More specifically, when an iodine solution is diluted with water, the iodine atoms are arranged in a random order within the liquid. This random distribution produces a light yellow color. When the iodine solution comes into contact with starch (long chain carbohydrates), the iodine atoms organize into a non-random arrangement, and turn blue. This blue color indicates that starch is present. However, when starch is broken down further into simple carbohydrates (no longer starch), the iodine molecules arrange in a random order again, producing the light yellow color.

Gluten is a protein found in wheat, barley, and rye that provides structure in baked products. Gluten is a linkage between the proteins glutenin and gliadin. Gluten develops through the formation of these bonds by the addition of water and manipulation (e.g. kneading). In general, flours with higher gluten content are high protein flours, and those with lower gluten content are low protein flours. High protein flours are used to make foods like bread and pasta, while weak/low protein flours are used to make foods like cake and pastries. Besides the type of flour, gluten strength can be controlled by manipulating the dough manually or by adding other substances to the dough. For example:

Each of the treatments above can be used to make different foods. For example, you knead and manipulate the dough much longer when making pizza crust as opposed to the time you would take to make a cake batter. The more you knead or stir the mixture, the more the gluten develops. This leads to stronger bonds and structure.

The protein gluten may be harmful to some. Individuals who have Celiac disease are allergic to gluten. When consumed, the gluten will cause an auto-immune response in the small intestine, leading to inflammation. The inflammation causes damage to the lining of the small intestine. The provided graphic below provides a visual of the damage caused to the intestinal epithelial cells of someone with Celiac disease. This will prevent absorption of some nutrients. If left untreated, it can cause developmental problems in children due to the nutrient deprivation. Individuals with Celiac disease must consume a gluten-free diet to avoid gastric distress and malabsorption. Celiac disease is not the only cause of gluten-related reactions. Individuals can also have non-celiac gluten sensitivity (NCGS). NCGS can cause similar symptoms as Celiac disease; however, an auto-immune response is not triggered and intestinal damage is not caused. Recent research has identified Fermentable Oligosaccharides, Disaccharides, Monosaccharides And Polyols (FODMAPs), a group of poorly digested carbohydrates, as a possible cause of the NCGS-type symptoms such as bloating, diarrhea or constipation. 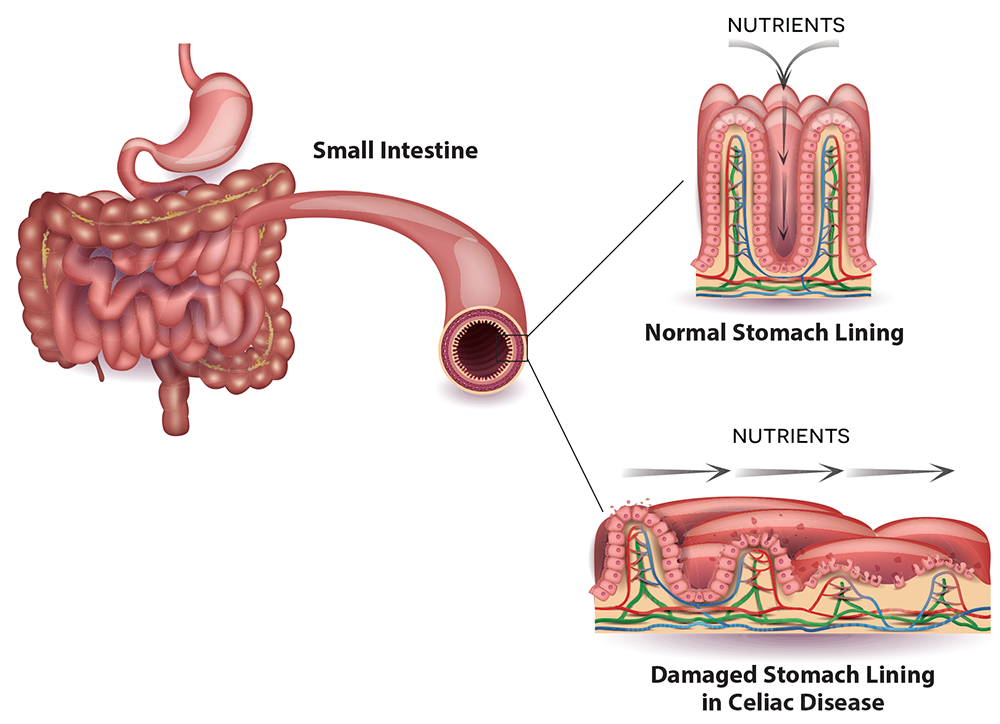 Amylose and amylopectin are the common starch molecules found in food. Amylopectin forms a long, branched chain, while amylose forms a long, straight chain, making it easier to digest. Amylase is the enzyme our bodies use to break down amylose. The diagram at the beginning of the student lab investigation displays this relationship pictorially. Amylose undergoes hydrolysis (addition of a water molecule) in the presence of the enzyme amylase. This reaction causes the amylose chain, a complex carbohydrate (polysaccharide), to breakdown into smaller units known as simple carbohydrates (disaccharides followed by monosaccharides). As mentioned above, starch is a polysaccharide. All starches are considered carbohydrates, but not all carbohydrates are starches. Iodine will detect starch molecules. Therefore, a positive test will result when the iodine solution comes into contact with bread or other starchy foods (e.g. potatoes). However, once amylase has had time to break down the starch molecules, the iodine solution will no longer detect starch. This is because, amylose is broken down by amylase into simple carbohydrate molecules that are no longer complex, like starch molecules.