Land and Soil in the Ecosystem

Students use an apple to represent the Earth and discover how our land resources are used. Through critical thinking, students discover why topsoil is a nonrenewable resource, the importance of soil to our food supply, and factors that impact topsoil distribution in different regions. Grades 6-8

Activity 2: The Value of Soil

conservation tillage: farming methods that reduce the intensity or frequency of tilling in order to maintain some ground cover throughout the year and disturb the soil as little as possible while still providing the conditions needed to grow a productive crop

sustainable agriculture: an approach to agriculture that focuses on producing food while improving the economic viability of farms, protecting natural resources, and enhancing quality of life for farmers and society as a whole

value: usefulness or importance of something; also, the amount of money that something is worth 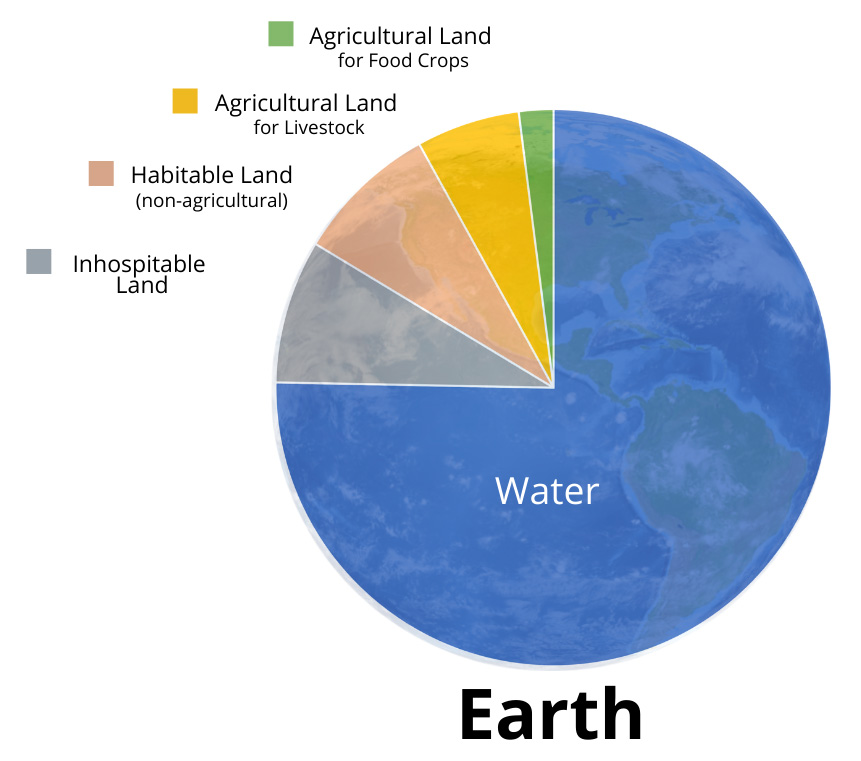 While the world population is growing, the size of our Earth and the natural resources that provide for our needs are not. How much arable land do we have on Earth to produce our food? How much land is located in climates that are habitable? What does land use in agriculture look like today? Oceans and other water bodies cover approximately 75% of our Earth leaving 25% land. Not all land is created equal. Polar regions, deserts, salt flats, and exposed rock make up one third of global land area. These areas are considered inhospitable and are not suitable for people to live or produce food. Two thirds of our land is habitable. It is located in climates where people can live and where they produce their food. Half of the world's habitable land is covered in houses, cities, roads, and other developments. The remaining half of all habitable land is used for agriculture.2

To further examine agricultural land use, 25% of agricultural land is used to produce food crops for direct human consumption. This includes the production of fruits, vegetables, beans, rice, grains, etc. The remaining 75% of agricultural land is used to feed livestock such as cattle, pigs, poultry, sheep, and goats. Livestock are raised througout the world for meat, milk, and eggs. Livestock land use includes range and pasturelands used for grazing as well as croplands used to grow grain commodities that are fed to livestock (rather than people). Why is there an uneven distribution of agricultural land devoted to foods for direct human consumption compared to the land devoted to feeding livestock? To explore this topic it is important to understand that cattle, sheep, and goats are ruminants. They have unique digestive systems that allow them to digest and gain nutrients from grasses and other forages that humans (and most other animals) cannot. 86% of global livestock feed intake in dry matter consists of feed materials that are not edible for humans.3 The average life cycle of beef cattle in the United States is 18-22 months.4 Cattle generally live and graze on pastures and rangelands until the last four to six months of their life when they are moved to a feedlot where they are fed harvested forages and high concentrate grains until harvest.4 Grazing animals can convert many otherwise unusable plants and by-products to quality protein. Grazing is especially vital in arid regions of the world where water is insufficient for the growth of other crops.5 These marginal lands can be considered low value due to poor soil, steep terrain, low water availability or other undesirable characteristics. Could land used to graze livestock be converted to cropland? Yes, but not all. Livestock use 2 billion hectares of land for grazing, of which 700 million hectares (35%) could be used as cropland.3

In addition to grazing, livestock animals also require feed in the form of cereal grains. Examples include field corn, soybeans, barley, oats, sorghum, and others. Grain-based feeds are fed to beef cattle in the feedlot, to dairy cattle during milk production, and to poultry and pigs that convert thier feed into other protein-based foods for humans.

The Value of Soil

There are many factors to consider in determining how land can be used. Climate, topography, and available natural resources are a few. One natural resource that is critical to agricultural land use is topsoil—the upper, outermost layer of soil. Whether the land is producing food crops, grazing livestock, or producing crops for livestock feed, it must have fertile topsoil. Agriculture depends on good soil.  Fertile topsoil produces the highest yields of food per acre. Farmers will work hard to protect their soil. However, erosion and other forms of soil loss can be complicated and expensive to address.

Soil is composed of both living (biotic) and nonliving (abiotic) elements. Soil contains air, water, and minerals as well as plant and animal matter. Soil is formed by the disintegrating of rock under the influence of climate. Events such as temperature fluctuations (freezing and thawing) contribute to the weathering of rock into the substance we recognize as soil. Organic matter such as leaves, dead plant material, and decaying organisms contribute to the biotic components of soil.

It can take 100 to 500 years to make one inch of topsoil. From the perspective of a human lifetime, soil is a nonrenewable resource. In the United States, cropland erosion decreased by more than 40% between 1982 and 2007. During this time, more and more farmers implemented practices like strip cropping, contour planting, conservation tillage, and planting cover crops to help mitigate wind and water erosion. Erosion has slowed over the past 30 years, but we are still losing millions of tons of topsoil each year at a rate much faster than the natural replenishment rate. Farmers don’t always have the resources needed to implement soil conservation practices. For example, cover crops effectively reduce erosion, but the seed for the crop costs money, takes time to plant, and needs water to grow, and the cover crop doesn’t directly generate any income for the farmer.

Erosion reduces agricultural productivity and washes sediment into rivers, lakes, ocean gulfs and bays, affecting fisheries and recreation opportunities in these water bodies. Soil loss affects our country’s economy and our lives. Soils produce our food, keeping us alive. How do we put a value on soil or land? Many would say it is simply invaluable, but farmers have to make economic decisions about the soil every day. They cannot spend more to protect the soil than they earn from selling their crops, or they will go out of business. Yet, if farmers don’t protect the soil, many years of erosion could destroy the productivity of our valuable agricultural soils. The field of sustainable agriculture evaluates problems like this and looks for solutions. Agricultural scientists, policy makers, engineers, and many others are working to help farmers develop techniques that are economically viable, produce the food we need, and protect natural resources like soil and water over the long term.

Note: The following activity uses an apple to demonstrate the distribution of Earth’s soil resources. Alternatively you can provide the same demonstration using the Apple Land Use Model.

Activity 2: The Value of Soil

The calculations for the apple demonstration were compiled by Population Education and can be found in their lesson plan, Earth: The Apple of our Eye.