Using the context of apples, students will apply their knowledge of heredity and genetics to distinguish between sexual and asexual reproduction as they explain how new varieties of apples are developed and then propagated to meet consumer demand for a tasty, uniform, consistent product. Grades 6-8

allele: a variant of a gene

dominant allele: an allele whose trait always shows up in the organism when the allele is present (written as uppercase letter)

genotype: the genetic makeup of an organism

heterozygous: having two different alleles for a trait.

homozygous: having two identical alleles for a trait

phenotype: the set of observable characteristics of an organism resulting from the interaction of its genotype with the environment

probability: a number that describes how likely it is that an event will occur

Punnett square: a diagram used to predict an outcome of a particular cross or breedingÂ experiment

recessive allele: an allele that is masked when a dominant allele is present (written as lower case letter)

This lesson can be nested into a storyline as an episode exploring the phenomena of taste and other characteristics that can be observed in apples. In this episode, students investigate the question, "What makes apple characteristics different?" Phenomena-based lessons include storylines which emerge based upon student questions. Other lesson plans in the National Agricultural Literacy Curriculum Matrix may be used as episodes to investigate student questions needing science-based explanations. For more information about phenomena storylines visit nextgenstorylines.org.

Prior to this lesson, students should have a basic understanding of inherited traits and know that all cells of an organism have DNA. DNA is the blueprint providing the organism with coded instructions for proper function and development.  Students should also know that genes are sections of DNA that are responsible for passing specific traits from parent to offspring. Students will need to be familiar with vocabulary such as phenotype, genotype, homozygous, and heterozygous to successfully complete the lesson and student worksheet and determine probabilities associated with possible offspring using a Punnett Square.  Students will be introduced to several varieties of apples and discover how new varieties can be created through crossbreeding.

Genetics is the study of heredity, while heredity is the passing of traits from parents to offspring. This lesson will help solidify key genetics vocabulary words.

The main idea of this lesson is to show the application of genetic crossing for the benefit of agriculture by producing apples with a variety of traits.

Gregor Mendel was a priest who worked with the genetic crossing of pea plants.  He would cross purebred short pea plants with purebred tall pea plants.  Through his experiments he determined that some traits were visible in the plant (dominant traits) while others were not, but were still able to be passed on to future generations (recessive traits). Understanding what we see and what the genetic makeup of an organism is can be quite different.  When you look at an organism, its physical characteristics are all dependent on a specific allele combination.  This is the difference between phenotype and genotype.  Students will use Punnett Squares in this lesson to help determine all the possible allele combinations in a genetic cross and their probabilities.

Crossbreeding allows breeders to create better quality apples by incorporating traits from two parent plants into the seeds of a new generation of plants.  Breeders must understand both genotypes and phenotypes to accomplish this task.  Breeders must also decide which traits are desirable and should be selected.  This is an intensive process that involves breeding successive generations of apples with the preferred traits in order to get the final product. There are several crop modification techniques breeders use to develop new plant/fruit varieties.

Apples are an important agricultural crop. There are about 7,500 apple producers in the United States.  Washington, New York, and Michigan are the leaders in apple production. Growers produce a variety of different kinds of apples.  Some apples are better for baking while others are typically consumed fresh. Apples are a good snack choice as they satiate hunger, contain no fat and relatively few calories while being high in fiber and vitamin C.

Apples are grown through a process called grafting rather than being grown from seed. This is done because most apple varieties are self-unfruitful, which means their blossoms must be fertilized with the pollen of a separate variety in order to produce fruit. The fruit has traits from the parent tree, but the seeds inside will be a cross of the two varieties. This mixture of genetic material in the seeds means the grower won’t know what traits a tree grown from these seeds will have and what the resulting fruit will taste like.

To avoid this uncertainty apple growers do not grow new trees from seed. Instead, new apple trees are propagated through a process called grafting. In this process a special cut is made into the rootstock of a tree. Then, they graft or transplant a section of a stem with leaf buds called a scion from a variety that has desirable traits into the cut.  In time the two pieces fuse together allowing for growth of the scion.  Eventually, blossoms on the scion will be pollinated and will produce a consistent variety of fruit with the desired traits.

This lesson has been adapted for online instruction and can be found on the 6-8th grade eLearning site.

After completing these activities, have students create a Venn Diagram to list both the similarities and differences found in sexual and asexual propagation methods. Discuss the benefits and drawbacks of each. 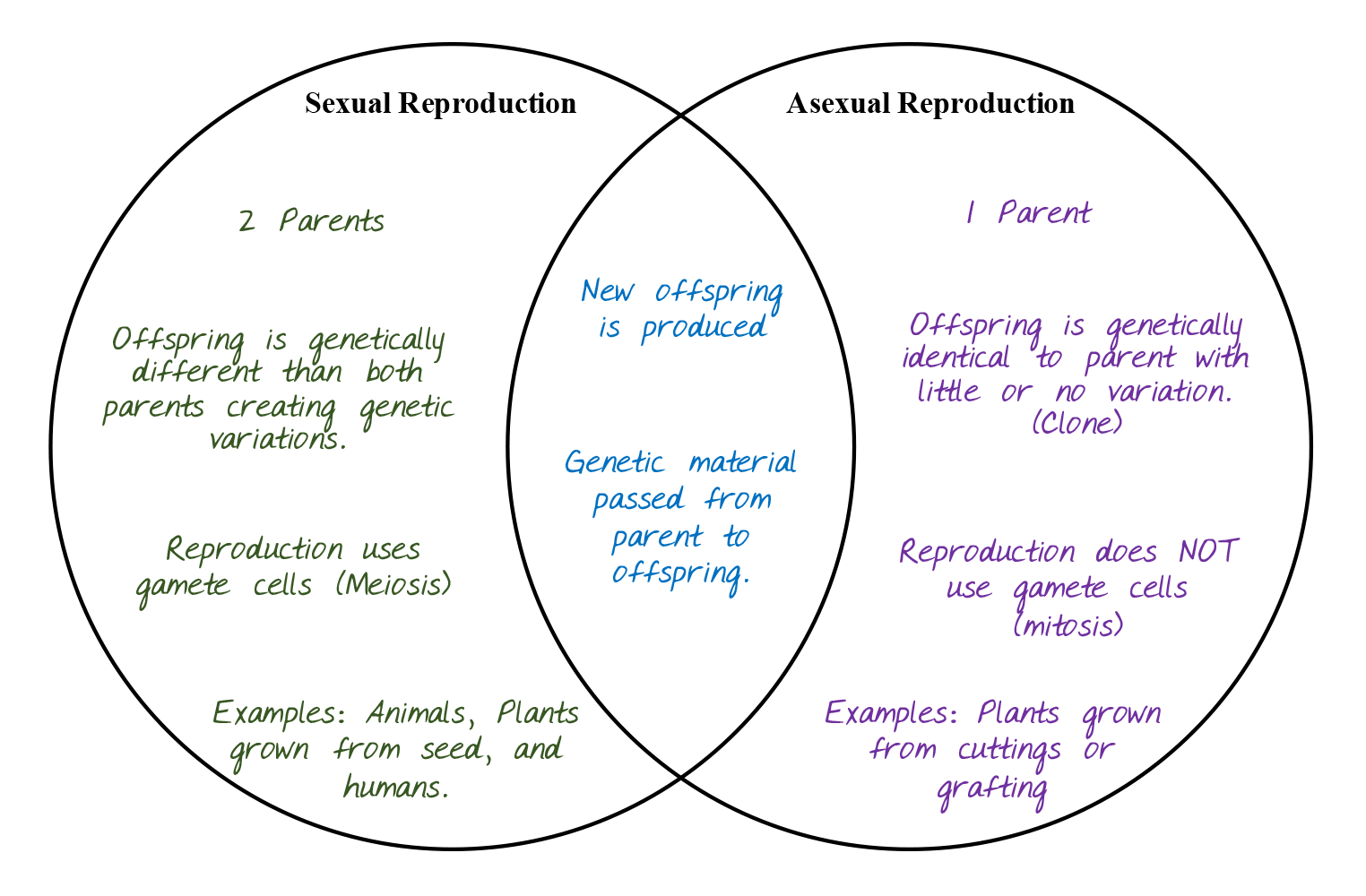 Effective phenomena-based instruction continues to evolve as students learn. New questions should arise throughout the learning process. The following questions may arise providing opportunity for other episodes in this storyline: