Students determine that the diversity of life in soil contributes to soil fertility. Grades 3-5

mycorrhiza: mutualistic association of a fungus with the roots of a plant

nematodes: tiny roundworms that live in the soil

pathogen: a bacterium, virus, or other microorganism that can cause disease

protozoa: microscopic organisms with a nucleus that can be multi- or single-celled, animal- or plant-like, and are often motile

Plants, animals, bacteria, and fungi all play an important role in soil development. Healthy soil is full of life! Plants provide a protective covering that prevents erosion by slowing water and promoting water infiltration. Plants are also a primary source of organic matter. Annual plants grow and die in a short period of time. Trees and shrubs drop their leaves in the fall. This plant material provides food to many soil organisms as it decays. Plants also release chemicals through their roots that provide food for microorgansims and accelerate the process of chemical weathering (breakdown of rocks, which releases nutrients and slowly turns rocks to soil). 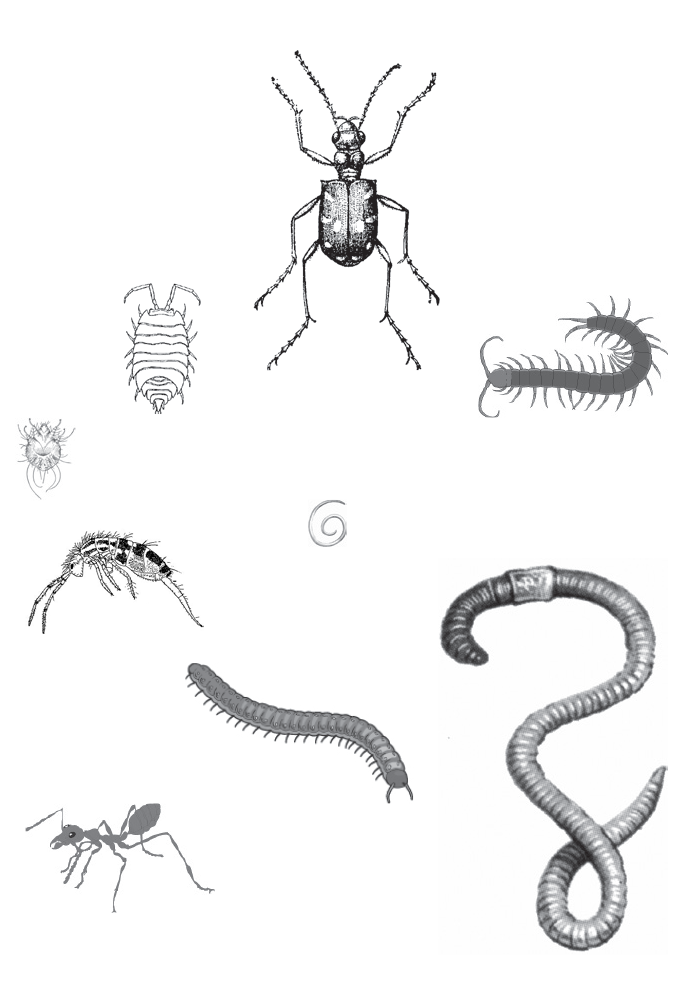 Multitudes of animals also contribute to the process of soil formation. Large animals contribute through their waste and the decomposition of their bodies after they die, while small mammals and many invertebrates live in the soil. Surface organic matter gets broken down and incorporated into the soil by the burrowing, eating, and mixing activities of voles, pill bugs, millipedes, mites, earthworms, and many others. Burrows and decayed organic matter improve and build soil structure.

There are billions of organisms in a handful of soil, and 99.99% are microscopic decomposers that play the important role of recycling nutrients within the soil ecosystem. As nematodes, protozoa, bacteria, and countless other microorganisms (you’ll need a microscope to see these) attack organic matter in search of food, they release nutrients for uptake by plants. Fungi, which feed primarily on wood and leaf tissues, are particularly important; many types of plant material cannot decay without their initial action.

Lichens (pronounced like-ens), often the first life to grow on bare rock, make an interesting contribution to soil formation. Although they look like plants, lichens are actually a fungus and an alga living together in a mutualistic relationship (benefits both partners). The alga provides food through photosynthesis. The fungus provides the tiny, hairlike roots that hold the lichen in place, absorb water, and secrete chemicals into the rock to release nutrients. The chemical weathering performed by lichens begins the process of soil formation. As lichens die, organic matter accumulates. Debris brought by wind and water gets caught in the lichens. Eventually there is enough soil formed for mosses to grow and later ferns, grasses, and other herbaceous plants will follow. Lichens are interesting to look at close up with a hand lens.

Many relationships in the soil ecosystem are important to the crops farmers grow. For example, crops like corn and tomatoes form mutualistic relationships with fungi through their roots. The fungi extend the reach of the plants’ roots, providing greater access to water and nutrients, and the plants provide the fungi with energy produced through photosynthesis. This type of association is called a mycorrhiza (pronounced mike-uh-rise-uh; plural mycorrhizae, pronounced mike-uh-rise-ee). For another example, the roots of legumes like peas and soybeans can be colonized by bacteria that provide the plants with nitrogen from the air in the soil. Other relationships are not beneficial to plants. There are nematodes, fungi, and bacteria that damage and infect plant roots. Farmers want healthy soil that is full of life, but they don’t want the pathogenic (disease-causing) soil organisms. Luckily, soils full of beneficial organisms are often inhospitable to pathogens.

Activity 2: What nutrients are in my soil?