This lab introduces students to the effect temperature has on reducing and controlling the growth of bacteria. Students will use conventionally pasteurized and ultra-high-temperature (UHT) milk to observe how different temperatures (hot, room temperature, cool, and freezing) affect the growth of spoilage bacteria. They will also learn about the importance of pasteurization in keeping food safe. Grades 6-8

*These items can be purchased in the Blue’s the Clue Kit from agclassroomstore.com.

ultra high temperature (UHT) milk: milk heated to at least 280Â° F (138Â° C) for 1 or 2 seconds, then packaged in sterile, airtight containers, making it shelf stable or able to be stored without refrigeration

Did you know that there are many ways to limit and control the presence of bacteria in food? Keeping food at safe temperatures is one of the easiest ways to prevent the growth of bacteria that cause illness. Leaving food out at room temperature for too long can put the food into "Danger Zone" temperatures between 40°F and 140°F. In this temperature range, common bacteria that cause illness can double in number in just 20 minutes. At home, it is important to remember to keep cold food cold and hot food hot. However, even before food gets to your home, many foods are processed to reduce or eliminate the presence of potentially harmful bacteria.

Much of the food processing that happens between the farm and the grocery store aims to keep our food safe. This lesson focuses on conventionally pasteurized and ultra-high-temperature (UHT) milk. Pasteurization and UHT treatment are different ways of using heat to process milk in order to reduce the presence of bacteria. By learning about how temperature affects the growth of bacteria, students will be able to better understand how they should prepare and store food at home to help reduce bacterial growth.

The technology of dairy science is continually improving, but some fundamentals remain the same. Bacteria are ubiquitous, and the bacteria present in milk can grow quickly in number, causing the milk to spoil or causing us to get sick. Pasteurization is a heat treatment performed at the milk processing plant which destroys harmful bacteria without affecting the quality of the milk. Milk may be pasteurized to kill bacteria using a low heat method (145°F, 63°C for 30 minutes) or a high heat method (162°F, 72°C for 15 seconds). Pasteurization does not kill all the bacteria contained in raw milk, but it does kill those pathogens that may cause disease. Bacteria that remain after pasteurization eventually cause milk to sour (spoil). Pasteurized milk is refrigerated to slow the growth of spoilage bacteria.

Ultra-high-temperature (UHT) treatment methods, as used by Gossner Foods in northern Utah, create milk that is stable at room temperature for nearly as long as the packaging remains sealed. UHT milk is heated to at least 280°F (138°C) for 1 or 2 seconds, then packaged in sterile, airtight containers. Because of the high heat and special packaging, UHT milk contains fewer bacteria than conventionally pasteurized milk. UHT milk is shelf stable and can be stored without refrigeration for up to 90 days. After opening, spoilage time for UHT milk is similar to that of conventionally pasteurized milk. Therefore, after opening, it should be refrigerated just like pasteurized milk.

Quality control workers in milk processing plants check for bacteria in the milk before they load it into a truck, again before the truck is unloaded at the processing plant, and in the storage tank at the processing plant before and after the milk is pasteurized. A quality control worker will continue to test the milk lots daily for 10 days after they are bottled. There are two minimum tests that must be conducted: 1) check the concentration of microorganisms in raw and pasteurized milk, and 2) check and detect the viable and dead microorganisms.

Careers in the dairy field encompass everything from quality control workers who ensure that the milk processing procedures are clean and safe for consumers, to breeders and geneticists working to increase milk yields of individual dairy cows, to scientists and researchers who are continually improving safety methods and maximizing productivity.

In UHT and pasteurized milk that are beginning to spoil, various microorganisms succeed one another as the chemical environment of the milk changes. The microbes themselves bring about these changes. The stages of microbial growth are dominated by different microorganisms. First, the population of Streptococcus bacteria grows rapidly, then Lactobacillus, then yeasts and molds, and finally Bacillus. Streptococci convert the milk sugar (lactose) into lactic acid. The acidity of the milk increases to the point where further Streptococci growth is inhibited. Lactobacilli then begin to grow and convert the remaining lactose into lactic acid. Acidity increases further until Lactobacilli growth is suppressed. The lactic acid sours the milk and curdles (coagulates) the milk protein. Yeasts and molds grow well in this acidic environment, and they convert acid into non-acid products. Finally, Bacilli multiply in the environment where protein is the only nutrient available.

Bacilli convert protein into ammonia products, and the pH (acidity) rises. These bacteria also digest the remaining protein through enzymatic action. The odor of spoiled milk becomes apparent once this has happened. Microbial activity causes changes in the pH of the milk. Fluctuations in pH are caused by fermentation and putrefaction (decomposition) processes.

As bacterial populations grow, they begin to use up the oxygen in the milk. Adding methylene blue to milk will turn it a blue color, and it will remain blue as long as oxygen is present in the milk. The more bacterial activity there is, the faster the oxygen will be used, and the sooner the milk will turn white, indicating that it is spoiled. For the following activities, you will be monitoring the speed at which the milk changes from blue to white and making comparisons between the different methods of pasteurization described above.

This rudimentary experiment will give you a sense of the differences between milk pasteurization methods, but it is not typically used by scientists to test the quality of milk. Rather, quality control studies are performed by examining the bacteria present in the milk, ensuring higher accuracy than the blue test and helping workers to find the source of bacterial contamination.

There are risks to be considered when drinking raw, unpasteurized milk. Raw or unpasteurized milk can carry dangerous bacteria such as Salmonella, E. coli, and Listeria, which are responsible for causing numerous foodborne illnesses. These harmful bacteria can seriously affect the health of anyone who drinks raw milk, or eats foods made from raw milk. However, the bacteria in raw milk can be especially dangerous to pregnant women, children, the elderly, and people with weakened immune systems. Pasteurization kills these pathogenic or disease-causing microorganisms.

Methylene blue is an indicator dye used in this experiment. In anaerobic conditions it is reduced to leucomethylene and becomes colorless. When methylene blue is added to fresh milk, it will dye the milk blue. As bacterial populations grow in the milk, they will use up the oxygen, and the methylene blue will lose its color. The rate at which the milk loses its color is a relative measure of bacteria present in milk.

This lesson was developed as a piece of a larger unit of lessons focusing on food safety from farm to table. Use the following links to see the other lessons in the unit: 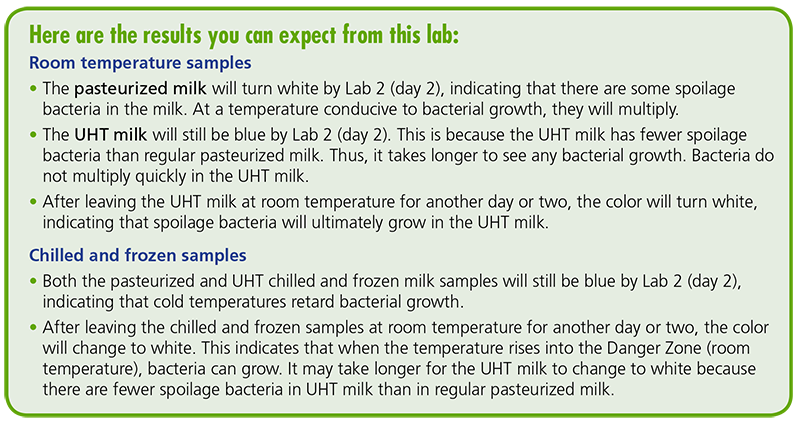 Use the following questions for evaluation:

Option B of the lab activity was adapted by Debra Spielmaker and Utah Agriculture in the Classroom.