The Cattle Drive and Westward Expansion

Students will gain a greater understanding of the historical context and purpose of the cattle drives that took place in the mid 1880s. Students will be able to explain the cause and effect relationships of life on the frontier including, population growth, and later the invention and use of barbed wire, refrigeration, and railroads. Grades 9-12

Supporting Question 1: What was it like to work on a cattle drive?

Supporting Question 2: What events and inventions changed ranching on the frontier?

cattle drive: the process of moving cattle from one location to another, usually to a new grazing location, or in a historical context to market

Historical Context of the Cattle Drive
Cattle are not native to the United States. They were introduced by early explorers and settlers from Spain and England. Some cattle were introduced directly to the United States, but others came indirectly by way of Mexico. In 1690, the first herd of 200 longhorns were driven North from Mexico to a mission along the Sabine River, an area which is now part of Texas. Texas became independent in 1836 and the Mexicans moved South, leaving their cattle behind. Texas farmers began raising the Mexican cattle for their hides and tallow. Tallow was made from rendered animal fat and was used to make candles, soap, and other products. Although beef was consumed in the 1800s, the lack of refrigeration and preservation methods limited its consumption. Today, cattle are primarily raised for their beef. 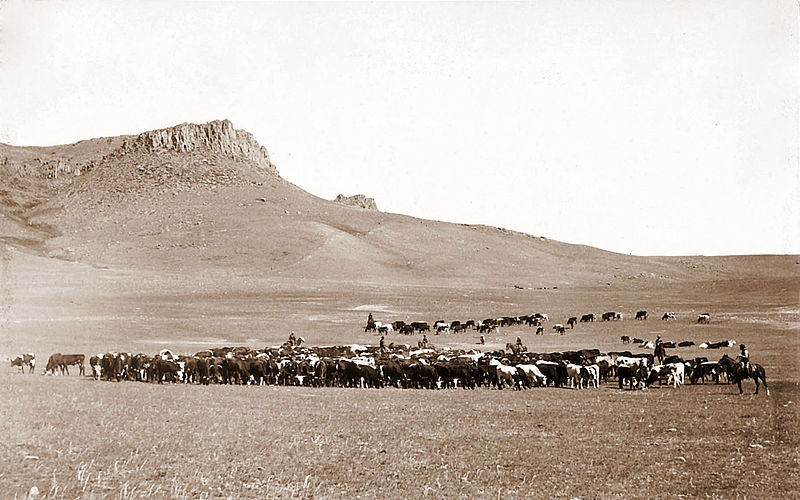 The first cattle drives headed West from Texas to San Francisco to the area where gold miners could be found (1849). Cattle ranchers could sell their cattle for 5-20 times the amount they could in Texas. The cattle market in California dropped along with gold mining. When the Civil War erupted (1861), many cattle herds were left behind on the open range. Cattle ranching halted for a time; however, the longhorn population grew as they continued to graze and reproduce on the prairie. After the war (1865), large cattle herds and consumer demand in cities resulted in cattle drives to locations where the railroad had a railhead. These towns were called "cow towns." When the animals arrived they would be sold and sorted for distribution to cities for slaughter and market. 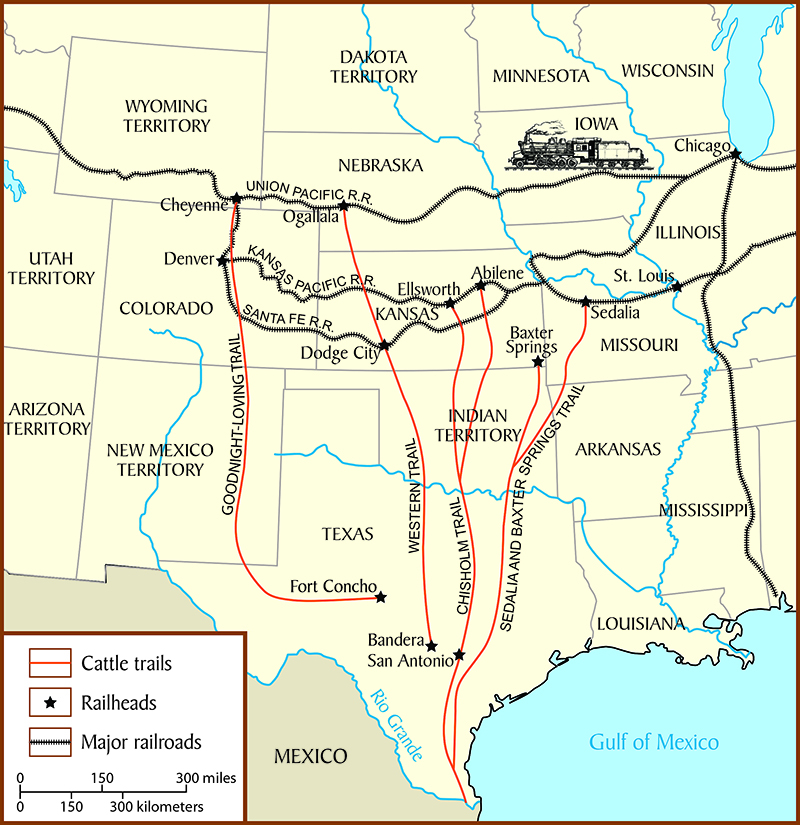 Cattle drives continued for about 20 years (through the late 1880s) until the railroads grew and ranchers had closer access to railheads. Rail transport not only changed the speed of delivery, but as tracks were laid and refrigerated rail cars were developed, trains could go to where the cattle were located. Thereby reducing rangeland degradation on the way to market and keep weight on the animals because they had not been moved 500-1000 miles north. 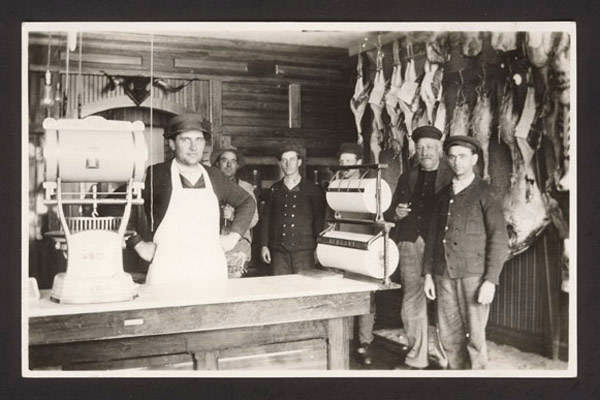 Life on the Trail:
A typical cattle drive pooled together cattle from several ranches. Most drives consisted of a total of 1000-3000 head of cattle.  The historical era of the cattle drives took place before the wide-spread use of fencing. Cattle roamed free and owners used brands and earmarks to identify the cattle they owned. Cattle brands were registered and could only be used by the owner. When a cattle drive was organized, the trail boss kept record of the brands and earmarks in the trail herd. After accounting for each ranches herd, the cattle were branded for identification with a single trail brand for the drive.

A 12-person crew could manage most cattle drives. While most of the crews were composed of men, there were some women who drove cattle to the railhead. As discussed in the book "Texas Women on the Cattle Trails" by Sara R. Massey, like men "some [women] took to the trails by choice; others, out of necessity. Some went along to look at the stars; others, to work the cattle. Some made money and built ranching empires, but others went broke and lived hard, even desperate lives." Men, and some women, then had their own responsibilities and typically held positions that included the following:

There were numerous trails used.  Noted trails include the Chisolm Trail, which led from Texas to Kansas. It was named for the Indian trader Jesse Chisholm. The original trail expanded as time passed due to cattle herds making new trails.  The Chisholm Trail became obsolete in the mid-1870s after an interstate railroad came to Texas. The Goodnight-Loving Trail crossed West Texas. It was established by Charles Goodnight and later Oliver Loving.  The route was longer, but generally safer.

There were many dangers on the trail. Indian attacks were a threat in some areas along a cattle drive. Flooded rivers caused delays and drought often made it difficult to keep the cattle watered. Stampedes were a real danger. The herd could be spooked by a variety of sights, smells, and noises, but lightning was the most common. To stop a stampede the cowboys would run on horseback to the head of the herd and turn them to the right, directing the stampede into a circle. In time the cowboys made the circle smaller and smaller allowing the cattle time to calm down and stop running.

Life on the trail was long and lonely. Most drives lasted 3-5 months depending on the distance they needed to travel and delays they experienced along the way. A typical drive could cover 15-25 miles per day. Although it was important to arrive at their destination on time, the cattle needed time to rest and graze. Otherwise they would be very thin when they arrived at the markets, which decreased their value.

The End of Cattle Drives:
The historical era of the cattle drive lasted about 20 years. It began shortly after the Civil War and ended once the railroads reached Texas. This transportation system provided a route for beef to travel safely from the farms and ranches where it was produced to the markets where it was sold. This 20 year stretch of time left imprints on western culture and hobbies that have lived on. Chaps, cowboy hats, boots, old western songs, rodeos, and of course the cowboy all have roots stretching to this era in history.

Supporting Question 1: What was a typical day's work like on a frontier cattle drive?

Supporting Question 2: What events and inventions changed ranching on the frontier?

Using evidence from historical sources, construct an argument (e.g., essay, project, video production, portfolio, detailed outline, poster) that addresses the compelling question, "How did the cattle drive era influence the westward expansion of the United States after the Civil War?

National Agriculture in the Classroom