Students determine the water holding and draining capacities of different soils and investigate how organic matter affects the amount of water soil will hold. Grades 3-5

soil structure: the arrangement of soil particles into aggregates, which contain solids and pore space

The best soil for plants allows water to move through slowly so that some is held in the soil for plants to use. Water moves too quickly through sand, meaning that plant roots can dry out rapidly. Water moves very slowly through clay, but clay can hold water so tightly that plants can’t get to it. Soil that is good for plants has a mixture of sand, silt, and clay particles, as well as organic matter. Organic matter, also known as humus, acts like a sponge to help the soil capture water. Organic matter is formed by the decomposition of dead plants and animals or plant and animal waste.

Organic matter helps sand, silt, and clay particles stick together, forming good soil structure. Hundreds of soil particles are glued together by organic matter into groups called aggregates. Aggregation of soil particles creates pore space, making it easier for water, air, and plant roots to move through the soil. A soil with lots of organic matter will be crumbly. The thoroughly decomposed organic matter in a crumbly soil can absorb lots of water. On a dry weight basis, humus has a water-holding capacity of several hundred percent.

While water is absorbed by organic matter and held in the small pores within aggregates, the large pores in between aggregates allow water to move quickly through the soil. Well-managed soils that are high in organic matter tend to be more porous, allowing them to rapidly absorb rain and snowmelt (if the soil is not frozen). This reduces erosion. Of course, when the soil is saturated by a long period of rainfall, any additional water then runs off. But until the soil is saturated, it will store up water and let it go gradually.

Crops use lots of water. Summers are dry in the western United States, and most crops will not grow without irrigation. Sometimes irrigation water is scarce and farmers have to take turns, irrigating only at their assigned times. In the eastern United States it rains throughout the summer, so many crops are grown without irrigation. But farmers can’t control the rain. Sometimes it may not rain for several days, or it may rain so hard that the soil gets completely saturated. Organic matter helps soil store more water, prevents erosion, and produces better crops. 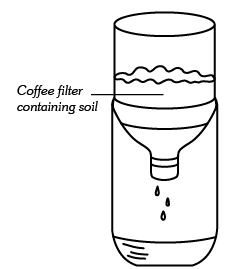